First things first. Let’s tie up a loose end from the previous installment. In a coin flip I am giving The Outsiders a victory over Weird Science. The former is just too good to overlook, with a powerful story and an all-star cast, while the latter, though it is another collaboration between John Hughes and Anthony Michael-Hall, is probably their weakest effort. Okay, so…let’s move forward. Today we’ll have the second round of competition in the Bodacious Division. Rock n’ roll dudes!!

Batman vs. Pretty in Pink

There have been many incarnations of my favorite superhero. The Caped Crusader of course originated in comic books in 1939 and continues to be a

staple of that medium today. A famously campy television show aired on ABC for three seasons in the late 1960’s. Director Christopher Nolan brought his dark & gritty vision of the character to the big screen in a solid film trilogy a decade ago. And before that directors Tim Burton then Joel Schumacher produced a quadrilogy (I think I just created a new word!) of Batman movies in the late 80’s/early 90’s. We’ll talk about the other films at some point in the future, but for now we focus on 1989’s Batman, the first of that quadrilogy. Starring Michael Keaton as the titular hero and the legendary Jack Nicholson as his archnemesis The Joker, Batman adequately reflects the character’s caliginous & savage comic book history while still remaining classic popcorn escapism. There were concerns about Keaton being cast in the starring role because he was known mostly for being a comedic actor, but he nailed it and to this day remains my favorite big screen Batman. Of course everybody knows that Nicholson steals the show and is still the best Joker ever, with all due respect to the late Heath Ledger. Anyone who has enjoyed the plethora of films in the “Marvel Cinematic Universe” in the past several years should know that they owe a ton of credit to Batman for breathing new life into the genre nearly three decades ago. Unlike its opponent Pretty in Pink did not get a first round bye, besting Broadcast News in a close call. John Hughes, Molly Ringwald, Andrew McCarthy, John Cryer, If You Leave…Pretty in Pink has everything one could want in an 80’s film. A tip of the cap must be given to the powers-that-be for the ending, wherein the girl (Ringwald) DOESN’T pick the loveable loser best friend and instead chooses the good-looking rich guy…just like real life.

The Verdict: Batman. This is a tough one because Pretty in Pink is the prototypical 80’s movie, while Batman is slightly ahead of its time in embracing a gloomier 90’s-esque sensibility. However, I must go with my heart here. In my opinion this is the best comic book film ever made, although I have admittedly seen very few others.

He’s baaaacckk. Tom Cruise dominated the box office in the second half of the 80’s, but his breakout role came in 1983’s Risky Business. Cruise stars as 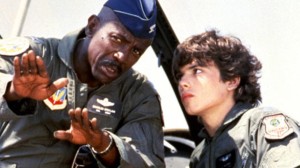 high schooler Joel, whose parents leave him alone while they go on vacation. Like any normal teenager Joel goes a little nuts, including getting’ busy with a…lady of the night. After inadvertently sending his father’s Porsche into the river he must come up with some quick cash to get it repaired. The answer?? Turn the house into a brothel for a night…obviously. Risky Business not only features a fantastic soundtrack (Phil Collins, Bob Seger, Muddy Waters, Prince), but includes an iconic scene in which Joel dances around his living room in his underwear lipsynching Old Time Rock n’ Roll. Iron Eagle upset An Officer & A Gentlemen in Round 1. It ranked 41st at the box office in 1986, behind unremarkable bombs like Cobra, Children of a Lesser God, & Police Academy 3, but ahead of solid competition including Flight of the Navigator, Youngblood, & Brighton Beach Memoirs. Obscure trivia: Did you know that Robbie Rist, best known as Cousin Oliver in The Brady Bunch, has a role in Iron Eagle?? Well you do now!!

–The Verdict: Risky Business. I love Iron Eagle, but Risky Business is a time capsule film and probably one of Cruise’s Top 5 roles.

Eddie Murphy is back too. I’m sensing a theme. At any rate, 1988’s Coming to America is much more aligned with the kind of comedy we expect from

Murphy. He stars as a pampered prince from one of those fictional nations that movies like to create, but doesn’t want to enter into an arranged loveless marriage. So the prince & his loyal assistant (played by Arsenio Hall) take off for NY City. There they find jobs at a McDonald’s-esque fast food joint and the prince falls in love with the owner’s lovely daughter. From there it is a classic fish-out-of-water story intertwined with a rom-com. James Earl Jones plays the king, while Samuel L. Jackson and Cuba Gooding Jr. have really small “blink and you’ll miss it” roles. This is undoubtedly one of Murphy’s best movies. St. Elmo’s Fire beat Romancing the Stone in the first round and is a classic Brat Pack film. It was the 23rd highest grossing film of 1985, behind stiff competition like Back to the Future, The Breakfast Club, & The Goonies, but besting notable films like Teen Wolf, Weird Science, Young Sherlock Holmes, & Vision Quest. St. Elmo’s Fire, by the way, is “a weather phenomenon in which luminous plasma is created by a coronal discharge from a sharp or pointed object in a strong electric field in the atmosphere, such as those generated by thunderstorms or created by a volcanic eruption, sometimes appeared on ships at sea during thunderstorms, regarded by sailors with religious awe for its glowing ball of light” and is named in honor of St. Erasmus of Formia, the patron saint of sailors. I have no idea what that has to do with the movie, but meaningless trivia is kind of my thing.

The Verdict: Coming to America. St. Elmo’s Fire has a fabled cast and a kickass theme song, but it is a flawed film, probably in part because it is directed by Joel Schumacher and John Hughes is nowhere in sight. Coming to America is directed by John Landis and has a likeable cast with a fun script. It doesn’t necessarily paint outside the lines, but it doesn’t really have to.

Star Trek IV: The Voyage Home vs. Eddie & The Cruisers 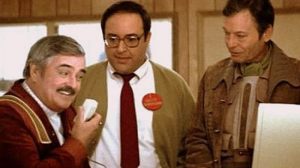 There were six films made with the cast of the original Star Trek series…William Shatner as Captain James T. Kirk, Leonard Nimoy as Spock, DeForest

Kelley as Dr. Bones McCoy, George Takei as Sulu, Nichelle Nichols as Uhura, Walter Koenig as Chekov, & James Doohan as Scotty…between 1979 and 1991. In this fourth installment the crew of the USS Enterprise goes back in time to modern day (1986) San Francisco to scoop up some humpback whales that will play a part in saving Earth in the 23rd century. It is a quintessential fish-out-of-water story, with our favorite space cowboys trying to fly under the radar in the 1980’s. It also holds up a rather humorous mirror to modern culture and allows the characters to really shine in a fun, lighthearted way. Eddie & The Cruisers scored an upset victory over the more acclaimed A Fish Called Wanda in Round 1 because that’s just how I roll. It is actually based on a novel that I may read someday. The premise is fantastic, but I have a lot of questions about the execution. In doing some reading about the film it sounds like it just ended up in the wrong hands and several mistakes were made. A more skilled director and production team might have made a movie that isn’t quite as overlooked & underappreciated as the final product.

The Verdict: Star Trek IV. I love Eddie & The Cruisers, but it could have been so much better. The Voyage Home isn’t necessarily a traditional Trek film. The action doesn’t take place in outer space and The Enterprise is MIA, but the script is really good and the cast does some of their finest work. It makes me smile, and in my book that’s pretty cool.

The Princess Bride vs. Cocktail

1987’s The Princess Bride is another film based on a book, the author being the guy who would go on to write or assist with screenplays for films like

Butch Cassidy and the Sundance Kid, All the President’s Men, Misery, A Few Good Men, & Good Will Hunting. The film uses the book as a framing device, with Peter Falk (aka Columbo) starring as a grandfather reading to his ill grandson, played by a pre-Wonder Years Fred Savage. In the “fairy tale” a young farm girl named Buttercup falls in love with a laborer. He goes off to seek his fortune so they can be married but is presumed dead when his ship is attacked by an infamous pirate. A few years later Buttercup is set to marry the prince of yet another fictional country before she is kidnapped by one of the oddest trios you’ll ever see. Of course the young lady’s true love isn’t really dead and sets out to rescue her. The film is directed by Rob Reiner and has a charming cast, including Robin Wright, Wallace Shawn, Billy Crystal, & Andre the Giant. The best way I can describe it is delightfully quirky…family friendly escapism at its best. Cocktail got the decision over Stripes in Round 1. It was the 9th highest grossing movie of 1988, beating out solid competition like Beetlejuice, Scrooged, Bull Durham, & Everybody’s All-American. The Beach Boys’ song Kokomo is the film’s unofficial theme song and was a #1 hit.

The Verdict: The Princess Bride. This is a tough one because I love Cocktail. It is probably the most underrated Cruise movie. But The Princess Bride, besides being a cult classic, is a really solid film and a lot of fun.

Stand By Me vs. Weekend at Bernie’s

Stand By Me defeated K-9 in Round 1. It was the 13th highest grossing film of 1986, behind Top Gun, Crocodile Dundee, & Ferris Bueller’s Day Off but 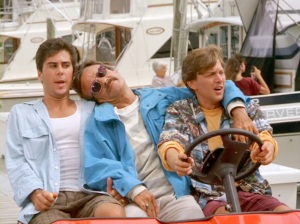 ahead of Pretty in Pink, The Fly, Three Amigos!, & Hoosiers. It was directed by Rob Reiner and features a cool 50’s soundtrack. The framing device with Richard Dreyfuss as an older version of one of the characters that lets us know how all of their lives ended up playing out is a nice touch. Weekend at Bernie’s got the first round decision over Bachelor Party. It ranked 39th at the box office in 1989, ahead of Road House, The Fabulous Baker Boys, & The Dream Team but behind crapfests like The Karate Kid Part III, The Abyss, & The Bear (whatever the heck that is). It is interesting to ponder what became of stars Andrew McCarthy and Jonathan Silverman. McCarthy…a member of the infamous Brat Pack who starred in notable films like Mannequin, Pretty in Pink, & St. Elmo’s Fire…hasn’t been in anything memorable since Bernie’s (unless one wants to generously include the 1993 sequel) and has more recently been doing guest spots in TV shows that no one watches. Silverman starred in a mid-90’s sitcom called The Single Guy for a couple of seasons and does a lot of TV stuff, but Bernie’s seems to be his career highlight. Fame is indeed fleeting.

The Verdict: Stand By Me. It isn’t even close.