At first glance it’s just another meme. You know…those pictures you see all the time on social media that take an amusing or sarcastic jab at some element of politics or pop culture. We have a quick glance, chuckle for a moment, and then move on. Maybe we take an extra second to re-post if we find it particularly amusing, but then we still go on with our day. But this one is different. This one makes you stop & think. Unrealistic?? Perhaps outside of science fiction it is, but then again if you look back at the history of sci-fi and see how many elements of the genre have come within the grasp of reality then it may not be so easy to brush off. At the very least it is an interesting philosophical query.

I posted this meme on my Facebook page and received a variety of responses. What I found really interesting were the questions raised by the (possibly intentional) ambiguity of the text, and the different age based viewpoints.

The second half…jump to age 45 with $50 million is pretty straightforward. One’s answer likely depends on current age. I will be turning 45 this 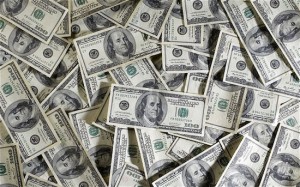 year anyway, so it wouldn’t be a big leap for me. If you’re someone my father’s age or even a person just a wee bit older than me like my brother from another mother The Owl, then going back in time a decade or two or three…especially with a fattened bank account…may be intriguing. If you’re someone in your 20’s or 30’s is $50 million worth leapfrogging the next decade or two?? Hindsight…as we all know…is 20/20, so for me personally I can honestly say that I wouldn’t have minded skipping over those years with a big wad of cash waiting for me on the other side because nothing really notably great happened in my life during those years, but I realize that I am an exception to the general rule. For many people those years are when they achieve professional success, meet someone special & get married, and have children. So is $50 million worth skipping all of that happiness?? And even for those older folks who’d actually be going backward to age 45, the question I have is would they still be dealing with many of the same issues they faced in their 50’s & 60’s?? Illness. Loss. Romantic failures. Would they still be facing surgery, divorce, & death of loved ones, albeit with an extra $50 million to soften the blow?? Is $50 million enough to relive some of your most painful memories…events that the money might not alter??

It is such a question that muddies the waters of the first half of the conundrum. It says that if you take the blue pill you go back to age 10 and “restart your life with all the knowledge you have now”. First of all, that’s both a lot of power and a pretty heavy burden for a ten year old kid to carry around. Definitely a double-edged sword. Secondly…and this is really important…would I be starting at age 10 now in 2017, or would I be going back to 1982 when I was actually ten years old?? I don’t think I’d have any desire to be 10 nowadays, but if I could go back and relive my life in the 80’s I might be interested. However, even then there are huge questions. If all the sudden I’m a child in the early 80’s “with all the knowledge” I took back from the 21st century do I have a responsibility to stop the assassination attempt on President Reagan?? How about the Challenger explosion?? 9/11?? Would I be able to prevent or atleast delay the earthly departures of my mother and my beloved grandparents, or would I have to relive the sadness all over again?? Should I try to contact Sly Stallone and tell him to stop after Rocky II?? Would I have the ability to kill the “careers” of the Kardashians, Pauley Shore, Justin Beiber, Lindsay Lohan, Miley Cyrus, & Taylor Swift before they ever happen?? Oh sure…I’d be able to do a lot of cool stuff. I’d be able to invest in things like Microsoft, Apple, Netflix, & Facebook in their infancy and bet on every sporting event knowing the outcome in advance, which was an angle that some took when commenting on my social media post. With all that knowledge one could make atleast the $50 million…maybe even more…way before age 45. I’d obviously know which people to embrace as friends and which people to avoid. I’d be able to make smarter decisions like eating healthy, being more confident with the opposite sex, and watching only the best TV shows & movies. But would it be worth it if you had to also go thru much of the same pain & heartbreak life has already thrown at you??

Obviously this is all hypothetical. As cool as Back to the Future is there is no such thing as a time machine. Earning millions of dollars is more complicated than simply swallowing a pill. We really shouldn’t question God’s will anyway. Yet it is undoubtedly an intriguing question. Which pill would you swallow??