ABC recently aired the 50th Anniversary edition of It’s The Great Pumpkin, Charlie Brown!, the classic Peanuts animated special that debuted in 1966. My trick-or-treating days ended many years ago and I’m not really into horror movies, but The Great Pumpkin is a Halloween tradition that has my full support. 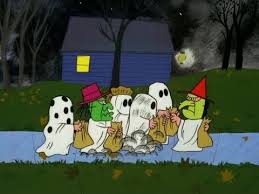 details. However, allow me to point out that for many years the show that we’ve enjoyed watching each October is NOT the one originally broadcast in 1966. Network television routinely edits the broadcast, presumably to squeeze in an extra commercial or two. My innate idealism still occasionally pops up, so I thought that may be…just maybe…the program would air unedited in celebration of the Big 50. No such luck. 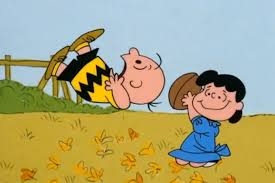 There are two scenes from the original that are usually cut. The first is an iconic interaction between Charlie Brown and Lucy Van Pelt where he naïvely thinks that THIS is the year that he is FINALLY going to kick that football. Of course malevolent little Lucy pulls the ball yet again and ol’ Chuck ends up flat on his back. The second deleted scene takes place at the kids’ Halloween party after Lucy has gone bobbing for apples and instead ends up with a mouthful of Snoopy. Snoopy goes over to Schroeder and the young piano virtuoso 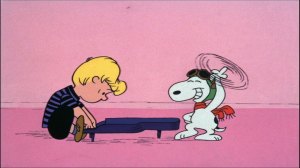 proceeds to play a set of World War 1 era songs, including It’s a Long Way to Tipperary & Roses of Picardy, which make Snoopy, who of course is dressed as a WW1 flying ace, very emotional.

After watching ABC’s broadcast and being disappointed that they couldn’t even show the program in its full & original form on its 50th anniversary I decided it was time to utilize modern technology. A couple of years ago I purchased one of those streaming stick players. What is really cool about it is that when I search for a movie or TV show it is almost always available from one of several services…Netflix, Vudu, Amazon, and a few other choices. However, upon searching for It’s The Great Pumpkin, Charlie Brown! I found that it was not available from any of the familiar suspects, but could be rented from a company I’d never heard of before called VidAngel.

VidAngel is a relatively new option launched in 2014. It allows viewers to filter out things like nudity, violence, & profanity from what may 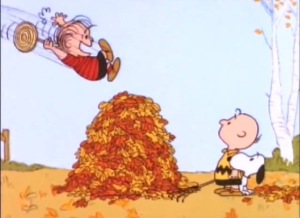 otherwise be a perfectly entertaining show/movie. It’s actually a really cool idea. For example, if you are watching Titanic with your young teenager but don’t want him to get an eyeful of Kate Winslet’s ample bosom then you can just edit that scene out. Or perhaps you’d really like to share your love of gangster flicks with a new girlfriend who’s a little squeamish. Just edit all of the violence. Now the other unique thing about VidAngel is that you actually “buy” the movie for $20 but after you’re done watching sell it back for $18, which means that it is ultimately a $2 rental. I am sure there are legitimate reasons for this approach, but exploration of the business model is not my current focus.

So, you would think that there wouldn’t be anything objectionable to be edited from The Great Pumpkin, right?? Well…much to my surprise that assumption is wrong. Way wrong. Apparently this sweet & innocent little animated special many of us have been watching annually all of our lives is potentially as offensive & depraved as a snuff film or anything ever made by Quentin Tarantino. Who knew??

VidAngel’s menu lists 64 possible filters for The Great Pumpkin. 64!! For a show that runs less than a half hour!! These potential pitfalls of

profanity are listed under headings like Crude Language, Violence/Blood/Gore, Disturbing Images, & Sexual References. Sex?? In The Great Pumpkin?!?!? Charlie Brown is more of a rebel than I ever dreamed!! Now, the catch to VidAngel is that they assume you’ve decided to use their service for a reason, so you MUST select atleast one filter. How ironic that my whole purpose was to watch the program unedited but then being forced to make an edit.

Amused more than annoyed, I began to look at the filter menu. Among the possible choices of scenes to be cut:

* ”A boy questions another boy’s belief in Santa Claus”

* “A girl offends an animal”

Ultimately I chose the most unobtrusive filter I could find, which was “several skeletons are seen”, which I knew comes during the opening credits. It shaved 4 seconds off the show, but I was able to enjoy Charlie Brown whiffing on kicking the football and Schroeder’s nimble piano skills.

As I said, I think VidAngel is a good concept. The world would be a better place without all of the vulgarity that has become such a pervasive

presence on the pop culture landscape. Unfortunately our society has become anesthetized to so much of that. However, it is hilariously disturbing when we can take innocuous entertainment like It’s The Great Pumpkin, Charlie Brown! and pick the bones of its innocence clean thru the prism of political correctness. Perhaps we need to pump the brakes a bit. Happy Halloween Manoverse!!