As predicted, my late night habits have changed significantly in the past year & a half. Upon David Letterman’s retirement and

the final piece of late night television’s transformation into something I barely recognize I opined that “it is just as likely that, at long last, I will begin my own transformation into a cantankerous old geezer and be in bed way before 11:30pm. more & more often.” Now I must admit that I am rarely in bed that early. However, if I am at home and not working it has become the norm for me to enjoy the late local news and then either watch a movie or turn the TV off altogether and read a bit or do some writing. The current late night lineup is oftentimes too political for my taste or just outright tedious. Either way I’ve got better things to do with my time. Your mileage may vary and that’s okay.

Dear Facebook: What exactly are “top” stories?? Who decides that?? More importantly, why…when a person makes it perfectly clear that they prefer the most recent stories…do you KEEP SWITCHING IT BACK?!?!?!?? I realize that using the site is free, but that doesn’t give you the right to just do whatever you feel like and ignore your customers’ wishes on even the most insignificant of issues. Get your stuff together.

Donald Trump had received the nomination they’d likely be beating Hillary Clinton by a comfortable margin??

I’m onto you delivery guys….. 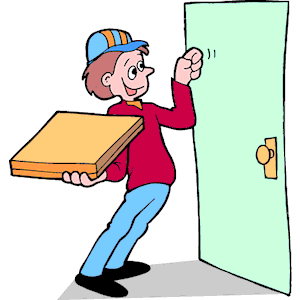 I’m single, live alone, & can be lazy. Therefore I probably eat out way too much, to the detriment of both my economic well-being and overall health. Drive-thrus & delivery are a godsend for guys like me. However, I have noticed a trend. Let’s say your pizza, salad, sandwich, orange chicken, or whatever kind of vittles you’ve ordered is going to cost $12-15. You hand the delivery person a $20 bill. Protocol would normally dictate that he/she begins to count out your change, at which time you either say “keep it” or return what you feel to be an appropriate tip. But I’ve run into a couple of sneaky ones who, upon being handed $20 for that $12-15 order simply ask “do you need change??”. Now I am perfectly aware that it is well within my rights to say yes and get my change back, but one of my weaknesses is that I am too nice, so the couple of times that this has occurred I’ve been caught off guard and simply say “no, that’s okay”. It is only afterward that it’s dawned on me that I’ve just given someone a freakin’ $5-8 tip for food that didn’t cost much more than that. Hey, I’m not naïve…from the delivery person’s perspective this is an ingenious ploy, and I can’t really blame them, especially when it works on suckers like me. There’s an old saying though…say it with me…”fool me once, shame on you…fool me twice, shame on me”. The sequel to that adage should be “there won’t be a third time”. Now that I’ve figured out the scam I’ll be sure to have exact change if at all possible from now on, and sadly I am likely to become far less generous with my tips. Sorry folks…I’m crazy, not stupid.

I may not watch very much late night television anymore, and most prime time shows are so tedious that I don’t even bother, but

allow me to recommend one newcomer. I never watched a single second of Kiefer Sutherland’s popular 24, but I have quickly become hooked on his new show Designated Survivor. Sutherland portrays a milquetoast HUD Secretary who ascends to the Oval Office after the President, Vice President, and pretty much every other high ranking government official dies when the Capitol is bombed during the State of the Union speech. I see vague traces of The West Wing, a show I loved, with added elements of intrigue & action. Who committed the heinous act of terrorism?? Why?? Who can the new President really trust?? How in the world can he rebuild the federal government from nothing?? It’s not a perfect show. There have been some missteps, like the surprising reveal of a second designated survivor as well as a Congressman who survived the explosion and a little too much preachy emphasis on anti-Muslim sentiment. Much like The West Wing the show unmistakably leans left and paints conservatism with a disdainful broad brush, but thus far it continues to build layers of conspiratorial drama. I’m not sure we’ll be talking about Designated Survivor a decade from now or even in a couple of years, but it has my attention for now.