Greetings friends and fellow cinephiles. It’s time to put the 3rd Round of 80’s Movie Mania to bed so that we can move on to the Sweet Sixteen. At this point I can’t recall exactly what I’ve said or not said in these little preambles, so please excuse any unfortunate repetitiveness. I do want to remind The Manoverse that I am well aware that I have left many worthy films out of this competition. If you haven’t seen some of your favorite 1980’s classics there are a few possible explanations. This competition is heavily influenced…maybe totally so…by my personal preferences and what I have or haven’t seen. Therefore you won’t find any of the Indiana Jones series (I’ve never watched any of them), no horror films (the only slasher flick I like is Halloween, which was made in 1978), or stuff like Tootsie, Full Metal Jacket, Gremlins, Fatal Attraction, Amadeus, The Color Purple, or The Untouchables…because either I haven’t seen them or have and don’t believe them to be all that remarkable. You may have noticed that Lethal Weapon was included in this competition while Die Hard was not. That was a difficult decision, but I have a little something brewing for Christmas 2017 and didn’t want to be redundant (also the reason cool holiday flicks like A Christmas Story, Christmas Vacation, & Scrooged are not a part of 80’s Movie Mania). You already know that I eliminated trilogies right off the bat, specifically the Star Wars and Back to the Future films, four of which were produced in the 1980’s. There were also a lot of laudable sports films made during the decade, including Hoosiers, Raging Bull, Field of Dreams, Major League, The Karate Kid, Bull Durham, & All the Right Moves, but I’ve already focused on them elsewhere so I decided including them here was unnecessary. Even with these omissions I believe I’ve presented a compelling & provocative tournament, and a fun trip down memory lane. Okay, enough of that. We ride!!

well-intentioned yet blundering family man who decides to drive his wife & kids from Chicago to California to visit the nation’s preeminent theme park. As usual with road trip flicks there are a plethora of epic fails & hilarious calamities, with the biggest twist coming when the Griswolds finally reach Wally World. This movie has held up remarkably well over the past thirty plus years, with the notable exception that the conclusion would never ever happen in The Internet Age. A few sequels were made with variable results…European Vacation isn’t too bad, Christmas Vacation is awesome, & Vegas Vacation is…well…let’s just forget it ever happened. A reboot/sequel was made last year in which the adult version of Rusty Griswold takes his own family on a cross-country trek. It is…okay. Stand By Me has gotten past K-9 and Weekend at Bernie’s to arrive at this point. It is one of the better film/TV adaptations of Stephen King’s work, right up there with The Shawshank Redemption and Carrie. It has a 91% Fresh rating on Rotten Tomatoes, and is nostalgically romanticized by almost everyone who was a young teenager in 1986.

The Verdict:       Vacation. I’m all about nostalgia, but I really can’t fully embrace Stand By Me. I suppose I just don’t relate to the boys in the film. I never had those kinds of relationships or those sorts of adventures as a kid. Objectively speaking it is a great movie, but it’s not one for which I’ve ever had deep affection. Conversely, I’ve seen Vacation countless times in the past three decades. If it’s on television I’m probably going to stop flipping thru the channels and watch. I’ve been known to keep it saved on my DVR for a boring rainy day. There are so many great scenes & quotable lines. It is undoubtedly the zenith of Chevy Chase’s long & prosperous career.

You were probably wondering about the whereabouts of ol’ Ferris. Well, he had byes thru the first two 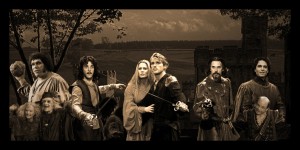 rounds but has now arrived. 1986’s Ferris Bueller’s Day Off solidified the star status of Matthew Broderick and tells the story of a scheming yet likeable high schooler, his girlfriend, & their best friend who decide to play hooky for the day and enjoy some of the finer things Chicago has to offer. They visit the Art Institute of Chicago, go to the top of the Sears Tower, eat lunch at a fancy restaurant, take in a Cubs game, & Ferris commandeers the microphone on a parade float belting out fun covers of Danke Schoen and Twist & Shout. In the process Ferris outwits his clueless parents as well as a persistent school principal. It’s all great fun, and we get to vicariously live thru a character who brazenly pulls off what most of us would never have the cahonas to try. The Princess Bride got past Cocktail in Round 2. It didn’t fair that well at the box office in 1987, coming in 41st, behind drivel like Outrageous Fortune, Mannequin, & Adventures in Babysitting. It did better than Ishtar and Superman IV though, so that’s something. Like other “cult classics” The Princess Bride would have to wait for the riches gained from home video to be deemed successful. Actress Robin Wright starred in the film while still doing soap opera Santa Barbara, but of course she has gone on to become one of Hollywood’s best. Rotten Tomatoes rates The Princess Bride as 97% Fresh, and our old pals Siskel & Ebert gave it double Thumbs Up. Ebert said it is “good-hearted fun” and “satire containing true innocence”, while Siskel called it “the weirdest assortment of characters since Star Wars” (which I’m pretty sure he meant as a compliment).

The Verdict:       Ferris Bueller. It’s odd to contemplate how different this competition might look with slightly altered matchups. The Princess Bride probably deserves a better fate, but Ferris Bueller is just so entertaining. And it kind of has a subtle message. We’ll get into that some other time though.

Our favorite Caped Crusader defeated 80’s pop staple Pretty in Pink in the last round. Batman was by far 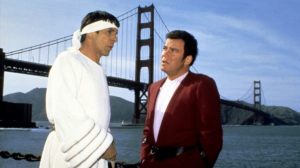 the #1 film at the box office in 1989, and almost three decades later it is still near the Top 50 highest grossing films of all-time when adjusted for inflation. Willem Dafoe, David Bowie, John Lithgow, Tim Curry, Ray Liotta, Robert De Niro, Christopher Walken, Richard Gere, Jeff Goldblum, Robert Englund, & James Woods were among the actors considered for The Joker. Robin Williams thought he had the role after Jack Nicholson initially turned it down, but then Nicholson reconsidered and Williams was dismissed. That angered him so much that he refused an offer to portray The Riddler in the 1995 sequel Batman Forever. Thus we were stuck with Jim Carrey. Director Tim Burton retroactively says of his own film that it was “more of a cultural phenomenon than a great movie”, while Christopher Nolan, who would direct a new Dark Knight trilogy a couple of decades later, called the 1989 film “brilliant, visionary, & extraordinarily idiosyncratic”. The Voyage Home…aka the one with the whales…defeated Eddie & The Cruisers in Round 2. It was the fifth highest grossing film of 1986, behind Top Gun and Platoon but ahead of Ferris Bueller’s Day Off, Stand By Me, Hoosiers, & Pretty in Pink. It has an 85% Fresh rating at Rotten Tomatoes, with Ebert calling it “easily the most absurd of the Star Trek stories”, but also “the best, the funniest, and the most enjoyable in simple human terms.” I concur.

The Verdict:       The Voyage Home. I can’t believe I’m saying this, but I think Burton is onto something, and since he directed the thing he should know…Batman is probably more of a cultural phenomenon than a great movie. I mean I still think of it as a great movie as well, but the competition is stiff. The Voyage Home…in my opinion…is right up there with Wrath of Khan in the Star Trek hierarchy.

Risky Business  vs.     Coming to America 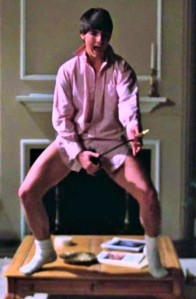 After a first round bye Risky Business took out Iron Eagle in Round 2. It was the 10th highest grossing film of 1983,

behind classics like Return of the Jedi & WarGames, but beating out some darn good competition like Scarface, The Big Chill, & A Christmas Story. It has an impressive 96% Fresh rating on Rotten Tomatoes. Ebert said Risky Business “is a movie about male adolescent guilt…in other words it’s a comedy”, and also called it “one of the smartest, funniest, most perceptive satires in a long time.” High praise indeed. Coming to America defeated Brat Pack classic St. Elmo’s Fire in Round 2. It was the 3rd highest grossing film of 1988, behind only Rain Man & Who Framed Roger Rabbit, and ahead of great stuff like Die Hard, Beetlejuice, Scrooged, Bull Durham, & The Naked Gun. Its rating on Rotten Tomatoes is 69% Fresh, which is really good but not quite on par with many of the greats in this competition. Judged against other Eddie Murphy films it is easily in his Top 5, but amongst the bigger universe of comedy films I’m not sure it stands out.

The Verdict:       Risky Business. While Coming to America is a solid comedy it doesn’t feel special except when held up alongside the dreck that comprises way too much of Murphy’s overvalued filmography. Conversely Risky Business is an iconic representation of its era.