Greetings sports fans. Let me first apologize for an abrupt & unforeseen ending to our Pigskin Picks of Profundity. Your humble Potentate of Profundity had two surgeries in November and spent a couple of months in the hospital, so things here in The Manoverse were unfortunately but necessarily backburnered. But now I’m back and ready to talk some sports. Enjoy.

Congratulations to the Denver Broncos, winners of Super Bowl 50. I had my doubts going into the game, but was pleasantly surprised. It is nice to see Peyton Manning go out on top. Most athletes don’t get that opportunity. I realize that he hasn’t officially announced his retirement yet, but it’s only a matter of time. The Broncos have Brock Osweiler waiting in the wings and I can’t see any other team signing Manning, who is half the QB he used to be. There isn’t any upside to playing another year, especially when he has the opportunity to retire as a Super Bowl Champion.

Lady Gaga has got some pipes, a fact that I recognized long ago. When she drops the outrageous act and just sings it can be quite

enjoyable, so I was cool with her singing the national anthem. However, I must point out that her stylist did her no favors. Was that look supposed to be some kind of tribute to David Bowie?? 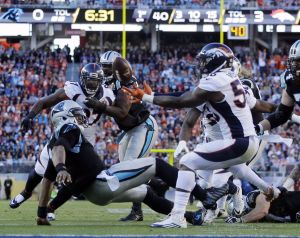 The old adage is that “defense wins championships”, and no game in recent memory proved that more than Super Bowl 50. Let’s be honest…Manning had very little to do with his team’s victory. Neither offense was impressive. It was the Broncos’ relentless pursuit of Carolina QB Cam Newton that secured the victory. It wasn’t the most exciting game to watch for sure, but kudos to Denver defensive coordinator Wade Phillips for conceiving a plan that worked to perfection. Phillips has been a mediocre head coach more than once and is the perfect example that sometimes knowing one’s role and understanding your limitations isn’t a bad thing.

Speaking of Newton…
Okay, I know that a Denver player was being interviewed (rather loudly) during Newton’s abbreviated post-game press conference and that player bragging about how they’d stymied the Panthers’ offense may have upset Newton. But that’s still not a good enough excuse to pout like a kindergartner whose Mommy didn’t buy the toy he wanted and then end the press conference after a couple of questions. Cam Newton has a track record of being an immature sore loser, and that behavior reared its ugly 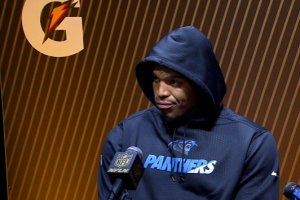 head again on football’s biggest stage. Dozens of star players & coaches have lost the Super Bowl and had to do interviews after the loss, but I can’t ever remember any of them acting so childishly. I know losing sucks, and I can’t imagine how much of a kick in the ‘nads it is to lose The Super Bowl. However, Cam Newton is going to have to learn to suck it up and be a man. My understanding is that he is a good-hearted & charitable guy who does a lot for his community, especially kids. That being said, it took about five minutes on Sunday for him to lose a lot of the respect people had for him, and he’s going to have to earn it back. I suspect that the Carolina Panthers are going to be a good football team for the next several years and may find themselves in this spotlight again eventually. If that happens I hope that Cam Newton…win or lose…will show us all a better version of himself.

A few random thoughts about Super Bowl 50’s commercials:
• Is it really a good idea for The Incredible Hulk to get all caffeined up on Coca-Cola??
• I’ll probably never drink a Mountain Dew Kickstart (whatever that is), but I’m totally on board with PuppyMonkeyBabies, which I find much less creepy than Super Bowl Babies.
• Peyton Manning’s random plug for Budweiser during his post-game interview was much more memorable than the commercials that they probably paid an arm & a leg for.
• Dachsunds (aka weiner dogs) selling Heinz ketchup?? Okay…I guess.
• I don’t care how hard they sell the notion…a Prius will never be cool. An Audi, on the other hand, is very cool.
• I still don’t understand what an Amazon Echo is.
• Jeff Goldblum singing the theme song from The Jeffersons is mildly amusing, even if I don’t recall which company the ad was for.
• I don’t know which is more entertaining…the fact that there was a Super Bowl commercial for Mexican avocadoes, the comforting thought that Scott Baio is alive and earning a paycheck, or that the producers of the spot were obviously fans of The Last Starfighter (or maybe the Mos Eisley Cantina in Star Wars). 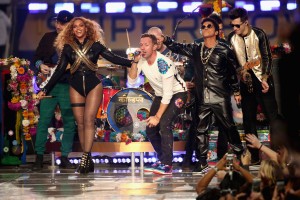 I only half paid attention to the halftime show, so I wasn’t immediately offended by the alleged political message within Beyonce’s performance. I was more offended that the powers-that-be made Coldplay the stars of the show and then at some stage in the process realized that if one looks up the term mediocrity in the rock n’ roll dictionary there is a picture of Coldplay, alongside about a half dozen other random acts that look & sound the same. The producers were then forced to bring in Beyonce & Bruno Mars, two of the more popular halftime acts from recent Super Bowls. It smelled of pure desperation. On top of that the performance was average at best. I don’t really care about the political rhetoric because I doubt if 95% of the audience even understood the point.