Today we go off the beaten path just a bit, with golf, the NBA, and a marathon. And I honestly wish I was addressing the sports aspect of the latter, but as you can probably guess that’s not the case.

The whole Tiger Woods controversy at The Masters was fascinating. First of all, I have no issue with him being assessed a two shot penalty versus being outright disqualified. New rules were put in place a few years ago for these exact kinds of circumstances. I’m not sure who is more obnoxious…golf purists or baseball purists. Anyone who was calling for Tiger Woods to DQ himself is an idiot. Secondly, 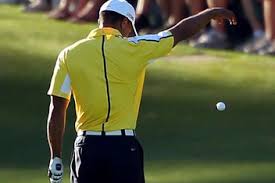 I’m not sure why a rules official wasn’t on hand to direct the situation on the course. Part of the blame there has to go to Tiger himself, as he should have ask for guidance rather than being cocky and assuming he knew the proper protocol. I have an issue as well with the fact that officials did review the incident while Tiger was still on the course and said everything was kosher only to reverse themselves after he’d signed his scorecard and left the premises. That is squarely on them…not him. And let’s talk about why they reversed their initial decision. The reversal was based on two things: a interview in which Woods inadvertently & unknowingly “told on himself” after the round, and a phone call in which a television viewer ratted Tiger out. In the future anyone in serious contention at The Masters or any other golf tournament should absolutely refuse all interviews based on what happened here lest they say something to incriminate themselves. And how exactly does one simply pick up the phone and call the Augusta National Golf Club in the midst of the sport’s premier event?? Is the number in the yellow pages?? I think some regrettable precedents were set at the 2013 Masters that may someday come back to haunt the PGA.

Okay NBA…now is your time to shine. Citizens of the Manoverse know that I don’t pay close attention to pro basketball until the playoffs begin, and that occurs this weekend. In the east the matchups look like this:

There’s no way Milwaukee beats Miami. I’ll be surprised if that series isn’t an easy sweep for the Heat. I’d like to think Boston can give the Knicks a good run but I think they’re just too old. I don’t think Indiana will have much of a problem beating Atlanta. The 4/5 series might stand a good chance of going seven games, but even if Derrick Rose doesn’t return to the court I think the Bulls will win. Ultimately I think it’ll come down to a Heat-Pacers conference finals, with Miami winning in 5 games.

The west feels like it’ll be infinitely more entertaining & unpredictable than the east. I could see all of these series going 6 or 7 games. The Lakers seem to be a popular pick to pull an upset, but that ain’t happening without Kobe Bryant and he’s out with an injury. At the end of the day I gotta go straight chalk in the first round. I think it all boils down to a Spurs-Clippers conference finals, with San Antonio pulling it out in 7 games.

That means an NBA Finals pitting the Miami Heat vs. the San Antonio Spurs, and as much as I would love to see Tim Duncan ride off into the sunset with another ring after defeating the despicable Heat I just can’t go there. It looks like another ring for that assclown Lebron James and his posse. My apologies to the fine citizens of Cleveland, OH.

To call the bombing at the annual Boston Marathon regrettable would be a huge understatement. As a lifelong sports fanatic I find it appalling when any such event is marred by tragedy. Sports are supposed to be an escape. They are supposed to be fun. Sure there is a lot of money on the line for everyone involved in any sport (especially the professional leagues for the big three…football, baseball, & basketball), and certainly there are fans who take things a

bit too seriously and are far more emotionally invested than might be healthy, but at the end of the day I think most people understand the difference between whatever the sports story du jour may be and “real” life. When that line is blurred, as it has been with this bombing in Boston, I as a fan feel violated on multiple levels. We don’t yet know if this act of terror was perpetrated by a group like Al Qaeda or a lone individual with some serious psychological issues, and it has yet to be determined if it was done as a political or religious statement or simply because the person(s) were angry about a less significant yet more personal issue, but I am sure the wheels of justice will eventually provide answers. However, after all is said & done the damage is irreversible. Three people (including a small child) are dead. Nearly 200 people were injured, some catastrophically so. Their lives will never be the same. The Boston Marathon will never be the same. And we seem to have segued into an age in 21st century New America where we can no longer gather in large groups and enjoy something as innocent & pleasurable as a sporting event without having to take precautions, consider possible consequences, and ponder potentially negative outcomes that we never would have fathomed just a decade or two ago, which is a damn shame.