I rarely comment on the deaths of various celebrities. I have a rather pragmatic view that comes directly from my father, who always says that death is part of life.  I also don’t think most celebrities are worth wasting much time & effort on, plus I believe that my RIP tribute that traditionally ends the annual Sammy Awards is an elegantly understated way to honor 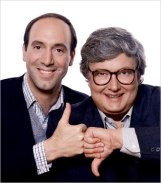 the passing of public figures who have meant something to me personally as well as the world in general. However, I want to take a moment to mention the loss of film critic Roger Ebert. The older I get the less likely I am to really care all that much about the opinions of others, but Ebert and his partner Gene Siskel (who died in 1999) were the gold standard of movie punditry when I was growing up. Now we have The Internet, with sites like Rotten Tomatoes where there is no shortage of opinions about everything that hits the theater. But in the 80’s and even into the 90’s Siskel & Ebert were pretty much it. I always enjoyed their show. They were smart, entertaining, and persuasive. They couldn’t get me to go see a movie that I had absolutely no interest in or dissuade me from seeing something I really wanted to, but if I was on the fence and not necessarily sure how I felt about a particular film then two thumbs up or two thumbs down could be quite influential. Mr. Ebert was a raging liberal who I disagreed with on many issues, but that’s par for the course and I have had to learn to put aside such differences and enjoy the talents & contributions of many who see the world differently than me. With the death of Roger Ebert I feel as if another little piece of my childhood is gone and that makes me sad.

So I was out & about on a lovely spring weekend and went to the mall for no apparent reason other than to get some exercise & check out the bookstore. I might have seen a movie but I was just a few minutes too late for the only one I was interested in seeing and the next showing wasn’t for four hours and I knew I wouldn’t hang out there that long. I decided

to get a haircut even though I didn’t necessarily need one just yet. The place was packed because there were a couple of local proms that night and several young ladies were getting all curled & styled. I signed in and left for a bit then came back. As I sat there I kept wondering how far down the list they’d gotten and was struck with another million dollar idea. Big hairstyling places need to be like the DMV where you are issued a number and when that number comes up it shows on a digital board along with a voiceover that says ‘Now serving number…”. When my time finally came (after a half hour of waiting once I’d returned) I was conversing with my stylist about how busy they were and she informed me that eventually they would be getting a system wherein you could go traipsing about the mall and they’d text you when it was your turn, which I think is an even better idea than mine. I suppose they might have that technology in some big cities already, which means it may arrive here in West Virginia sometime in the next couple of decades.

God help me, but I have been unsubscribing from friends on Facebook who do nothing but post about their wonderful

spouse or significant other. I know that is awful. But when I am sitting at home every night without so much as a phone call from anyone outside of my Dad I just can’t seem to get jazzed about the love lives of people far less lonely than me.

One of the things I do on a daily basis is check out various news sites…CNN, FoxNews, Drudge, USA Today, etc….to, as I tell Rocco, see what’s going on in the world. During one of those recent online expeditions I was kind of surprised but not really (if that makes any sense) to see it trumpeted as newsworthy that NBC Today reporterette Jenna Wolfe is “having a baby” with her lesbian lover (also an NBC news “journalist”). First of all, who cares?? Millions of people have babies every day. It’s not news. And neither

Wolfe nor her “partner” are famous enough for anyone to give a damn. But more interestingly to me was the fact that two lesbians “having a baby” (I’m sure there is sperm involved in this somehow but of course the story conveniently left that part out) is seen as something to celebrate in 21st century New America. Look, do your thing. Live your life. Sleep with whomever you please. Wallow in whatever kind of deviant lifestyle you choose. But if people are going to constantly berate Christians for trying to “shove our beliefs down other peoples’ throats” then please do not be so hypocritical as to publically rejoice in your sinful choices that go directly against the Word of God. I am not easily offended but I get a little sick & tired not just of the wayward path America is following but the fact that so many are so brazenly, gleefully, boldly taking that path while looking at those of us who embrace traditional, Godly principles as if we are the crazy ones.

The suits at NBC have confirmed the rumors. Next year Jimmy Fallon will take over The Tonight Show. I do like the fact

that they are keeping Fallon in New York. They aren’t retiring The Tonight Show name as I suggested, but I didn’t really expect that to happen. I am sure that Leno will land on his feet, whether that means fading into obscurity or getting a show on another network. Word on the street is that SNL’s Seth Myers will get the 12:30am Late Night gig and I suppose that is a safe if uninspired choice. Now CBS…it’s your turn. David Letterman hasn’t been funny for a few years now and it may be time to give him a gentle nudge out the door.

I like cereal. I’m not quite on the Seinfeld level yet where I have a dozen or more boxes in my kitchen, but I usually have 2 or 3 atleast. I have been trying to eat a bit healthier so I lean toward high fiber, low fat varieties, although being the minimalist that I am my favorite…as it has been since I was a kid…is Rice Krispies. Anyway, I was fixing myself a bowl one day and began pondering packaging. The package that several products come in has evolved over the course of my lifetime. Not only is milk no longer delivered straight to one’s door but it also doesn’t come in glass bottles anymore. Ditto for glass bottles of

cola. The beloved silver foil that Ho-Ho’s used to come in disappeared decades before Ho-Ho’s themselves vanished from supermarket shelves. McDonald’s…bowing to pressure from environmentalist wackos…eliminated Styrofoam in favor of simple paper or cardboard years ago. When I was a kid we had to drink water from the faucet, but now it comes in handy dandy bottles. I remember my mom coming home from the store with big ol’ brown paper bags. Now all your groceries are packed in plastic bags at the checkout counter, although once again the environmentalists are trying to persuade everyone to convert to permanent cloth bags. At any rate, what I am wondering is why cereal packaging hasn’t advanced?? Cereal comes in a transparent plastic bag which is then placed inside of a rectangular cardboard box. If one doesn’t tear open the cardboard just right (and I never do) the little tabs they put in place to enable one to reclose the box is useless. And if one doesn’t tear open the inner plastic correctly then the cereal doesn’t pour out right and can potentially end up all over the place. I find this troubling and am calling upon some enterprising soul to fix the problem. Yet another million dollar idea I am offering up free of charge.