Several years ago I wrote a little ditty about Mother’s Day in which I provided some background on the holiday, spoke a bit about my own mother, and encouraged anyone fortunate enough to still have theirs around to visit or give her a call. However, in the years that I’ve been doing this thing that I do I don’t believe I’ve ever written exclusively about my Mom, and the twenty-year anniversary of her death seems like an appropriate time to change that. Don’t worry…I’m not going to get all sentimental & weepy. Well…not too much anyway. I don’t want to deify my mother or describe her in unrealistically glowing terms. Mom was a human being just like the rest of us, but she was my mother and I loved her.

My father has taught me many valuable lessons throughout my life, but two stand out. The first one being that even when a person might be really nice &

sympathetic to “the poor little crippled boy” they’ve pretty much barely left the room before they forget all about me because people have their own problems. That has been huge for me. It made me understand that the world doesn’t owe me anything and that politeness, good manners, & empathy (all good things) are vastly different from true love, caring, & friendship. The second thing that Dad taught me was that…because of my disability and the tangential health issues that are part of the package (I’ve had over 30 surgeries in my lifetime)…my Mom did more for me in a single week than most mothers have to do for their kids in an entire year. She was 25 years old when I was born and already had a three-year old daughter, but dealing with a newborn who was paralyzed and faced an uncertain future had to be a daunting task. Thankfully there was plenty of familial support, but she was clearly my primary caregiver, and there are no words in existence to properly thank her for everything she did for me. I have always felt…for lack of a better way of expressing it…a sense of guilt because my parents were young adults in their mid-20’s with everything in front of them and then I came along and suddenly their whole world changed. The older I get the more I understand (or atleast try to) what that must have been like and I am so…humbled…by it.

I don’t know if anyone would have described Mom as tough before she got married and had kids, but certainly life toughened her up. Don’t

misunderstand…she was kind, soft-spoken, & as down-to-earth as anyone, but when circumstances called for it she could open up a can o’ whoopass. Certainly she fought many battles for me in my childhood, from dealing with the medical establishment (always a fun chore) to opening the eyes of an education system who couldn’t wrap their heads around the idea that a physical handicap did not mean that I was also mentally impaired. I appreciate the fact that my mother wasn’t afraid to speak her mind or stand up for what’s right. My sister & I absolutely benefitted from parents who had standards…they expected us to be respectful, do good in school, & behave. We weren’t permitted to run around like entitled savages and were properly punished when we did act up, discipline that has undoubtedly made us better adults.

Sadly, just as my health had begun to stabilize and the school drama had gotten figured out Mom developed her own health issues. Her aging doctor (who

probably should have been retired) kept telling her she had a cold, but she knew better. A new doctor took one look at her and diagnosed her with asthma. Over the next 19 years she had to go into the hospital semi-frequently for what she referred to as a tune-up, take breathing treatments multiple times each day, and consume numerous medications daily. In hindsight I recognize how her health deteriorated slowly, but in the moment I was just a kid, growing up into a teenager, going to school, and living what I considered to be a fairly normal life. I was away at college when Mom was diagnosed with cancer and had to have a lung removed. My mother never smoked a day in her life. Her father had issues with alcohol so she had no use for any of those kinds of proclivities…she was as straitlaced as they come. In our humanity we can’t help but ask “why” and search for logical explanations, but sometimes there are no conclusive answers. Five years after the lung was removed my mother was gone, and we found out after the fact that the cancer had returned. Sometimes we don’t see God’s blessings when they occur, but now I understand that Mom’s ending could have been much more horrific & painful if she had lingered as the cancer spread. 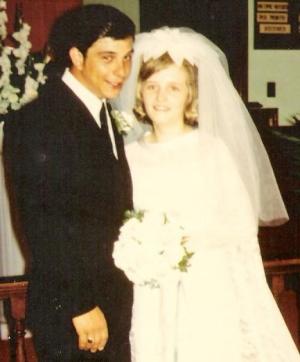 I will never forget looking into her eyes as she lay in the hospital hooked up to life support, visibly aware of what was happening to her but unable to speak and powerless to do anything about it. Those moments will haunt me for the rest of my life. I will never forget how it was a balmy 70 degrees on the day of her funeral…a rarity during February in this part of the country and an absolute blessing given the circumstances.

So now here we are two decades later. I’m just five years younger than Mom was when she died. I don’t know whether my life or the lives of my father, sister,

& nephews would have turned out all that differently had she lived. My mistakes and my shortcomings are my own responsibility. However, I oftentimes think that she might have made a positive difference…either by gently guiding me in the right direction or by being the kind of stern parent to call me out on my foolishness. I learned a long time ago that both methods can be effective depending upon particular circumstances. Regardless, all I know is that there has been a void in my life for the past 20 years…a sense of loss from which I’ve never quite recovered. On the other hand, when I read or hear about situations in which small children or even teenagers lose their mother I realize that I was blessed to have mine until I was an adult.

Millions of people lose loved ones every day, often under tragic circumstances. My family isn’t unique or special in that regard. I’m a grown man with a job, bills, & responsibilities who no longer needs my Mommy to fight my battles, but that doesn’t mean I don’t miss her. I’d do just about anything to have one more conversation with her, to be able to say a proper goodbye. However, life rarely works like that, right?? Mom had a saying: “give me my roses while I’m alive”. We appreciated all of the people that came to her funeral all those years ago, and there is no doubt that the cards, flowers, food, & words of comfort were meant with deepest sincerity, but while those things provide a notion of solace to the family they obviously don’t benefit the dearly departed. So give your friends & family their roses now. Call. Visit. Text. Hit them up on Messenger. Hug them. Thank them. Tell them you love them. The day will come when you can no longer do any of that, and the feeling of loss may diminish but never disappears.

Life moves forward. I oftentimes wonder how my mother would react to certain things. Would she think that “reality” TV is as stupid as I do?? What would

she think of smartphones?? Would she give a rat’s petoot about social media?? I know she’d be proud of her two grandsons. They were little children when she passed and now they’re 20-somethings with lives of their own, complete with all of the requisite responsibilities & issues that come with adulthood. I wish she could have watched them grow up. I wish they could have had their grandmother as long as I had both of mine. I wish my parents could’ve grown old together and helped each other thru their “golden years”. I know I’m focusing on my mother at the moment, but my Dad is simply the best and I know he misses Mom as much as my sister & I do. He and two of his cousins all got married within several months of each other back in the day, and last year both of those cousins celebrated their 50th wedding anniversaries with surprise parties given by their children. It made me profoundly sad that Dad didn’t get the same opportunity.

I’m not sure I have a lyrical conclusion to all of this or even a cohesive point. I got up this morning and went to work. It was a typical, ordinary Sunday in

most ways. I now work in the same hospital where I was born & my mother died. Well, it’s a different hospital but the same building, if that makes any sense. I couldn’t help but become a little bit emotional today, although I think I did a decent job of hiding it from those I encountered. I feel like it is important to mark the occasion. I don’t know if anyone else but me will ever read these words, and if anyone does they might get the impression that I’m a bundle of neuroses. So be it. The truth is that I’m doing okay. Thru all the ups & downs and all the hardships & victories I have felt the hand of God in my life. I am blessed beyond what I have any right to expect, and my first blessing was my mother.

Who can find a virtuous wife? For her worth is far above rubies. The heart of her husband safely trusts her, so he will have no lack of gain. She does him good and not evil all the days of her life. She rises while it is yet night and provides food for her household. She extends her hand to the poor, she reaches out her hands to the needy. Strength and honor are her clothing. She shall rejoice in time to come. She opens her mouth with wisdom and on her tongue is the law of kindness. She watches over the ways of her household and does not eat the bread of idleness. Her children rise up and call her blessed. Her husband also, and he praises her. Charm is deceitful and beauty is passing, but a woman who fears the Lord, she shall be praised. (Proverbs 31)