By far one of my favorite traits in a human being is resilience. I dig the kind of people who have overcome obstacles and are able to put away their pain &

sadness to show the world an irrepressible spirit with smiles & laughter. Sure they might be faking it much of the time, but they’re making an effort, and that’s beautiful. One of my favorite scenes is in the film Rocky Balboa when an aging Italian Stallion is talking to his son about such resilience. He makes the point that the world “will beat you to your knees and keep you there permanently if you let it”, and that life “ain’t about how hard you hit…it’s about how hard you can get hit and keep moving forward.” I admire anyone that gets back up when they get knocked down. It shows courage, toughness, & humility. That’s the kind of person I’ll be glad to call friend any day.

I was amused a few weeks back when perusing social media after President Trump’s State of the Union address and ran across a comment from a friend of a friend who opined that it was “one of the most poorly written speeches I’ve ever heard” and “his speechwriters should find a new job”. Now I’m the first to admit that Trump isn’t a gifted public speaker, but I also believe that no matter what one’s political opinions might be that SotU was objectively a home run. Was it a little gimmicky?? Perhaps. But to call it “poorly written” is a bad take from someone who I assumed was much smarter. I’m pretty sure that person is a hardcore liberal, the kind who actually believes Bernie Sanders is a legit choice to be President of the United States. That’s fine…it’s a free country & we can agree to disagree. And speaking of the State of the Union, I wasn’t all that offended by Speaker Pelosi acting like a belligerent toddler throughout the evening and tearing up President Trump’s speech at the end. It exposed what kind of person she really is, though sadly I have no doubt that the people in her district in California will re-elect her to an 18th term and she’ll get four more chances to hear a Trump SotU.

I don’t suffer from depression myself, but I do go thru the occasional valley, which can include feelings of loneliness

& isolation. However, I think the point of this meme can be be expanded beyond all of that. It’s a tremendous dichotomy in our modern world where everyone is connected online and communication is easier than it ever has been that society is oftentimes non-communicative. It has been a source of frustration for me over the years that so many people who I’d really like to talk to & see more often rarely seem to reach out. My phone hardly rings. I spend most days & evenings alone when I’m not at work. Sometimes I don’t mind…but other times I do. I don’t feel like my ability to reach out has been muted…I’ve just made the conscious decision to not bother with those who don’t seem to notice my absence.

I’m 47 years old & single, so my expertise about women is virtually nil, but I’d like to think I know a few things. An acquaintance of mine recently posted on 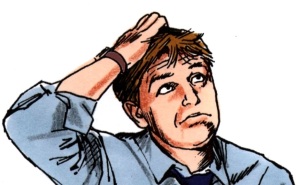 social media that “I will never tell you my needs until I am desperate. You are expected to just know or you’re not the one for me because I want an intuitive man.” Okay…there’s a lot to unpack there. On one hand I do kinda sorta get it. When my sister was a teenager my mother used to become frustrated because she didn’t think she should have to tell my sister every little thing that needed done around the house or that she needed help with; Mom expected my sister to see what needed done & do it without being prodded. To some degree that is completely understandable. However, there is a thin line between intuitive & psychic. I’d like to think that I’d be the kind of attentive boyfriend/husband that would make a woman content and be able to anticipate her wants & needs. However, in the course of my life I have found direct communication to be…efficient. A person can’t always read your mind, no matter how well y’all know each other. I don’t care what kind of relationship is involved…romantic, professional, parental, friendship…forthright communication is best. I believe in most instances people are pleased by the result of such refreshing honesty. Certainly it seems like a better course of action than assumptions, guesswork, expectations, disappointment, & lingering bitterness based on misguided idealism.