Y’all know how much I love Christmas. To be honest I thought that I had said pretty much everything that could be said about it over the years, but then some new ideas began percolating (I’ve already got something big planned for 2017). I’m obviously a movie buff, and Christmas films were a prominent chunk of my 100 Favorite Movies series a few years ago. So I began pondering what exactly makes these movies great. Sure the holiday subject matter and related accoutrements are important, but a good movie, TV show, or book has to have awesome characters, right?? Christmastime is bursting with memorable characters on film, in literature, & various other media. Many are meant to entertain children, but not all. Several have found life in multiple platforms…songs, cartoons, novels, etc. Who are these characters?? Why do we love them?? What allows them to endure and remain such an integral part of our beloved Christmas season?? I don’t have all

the answers, but as always I do have plenty of opinions. Sit back, dim the lights, put on some soft Christmas music, sip a warm beverage, & enjoy a trip down an evergreen & snowflake tinged memory lane. Feliz Navidad.

No, I do not mean the famous 19th century British author. Well…not really. In the 1992 classic The Muppet Christmas Carol long-beaked, squeaky-voiced Gonzo the

Great portrays Dickens and narrates the action alongside his pal Rizzo the Rat (playing himself). It is a unique yet unexpectedly faithful telling of the well-known story, and “Dickens”’ narration is an amusing & effective technique.

We usually associate Christmas with warmth, goodness, and positive, life affirming values. However, every hero needs a villain to create obstacles so that those good

things can be appreciated even more. Gruber is the German thief who dares to hold up an office Christmas party to steal hundreds of millions of dollars in bond certificates in 1988’s Die Hard. He and his group of terrorist thugs ultimately lose to someone we’ll discuss a bit later, but Gruber nevertheless has become one of the most unforgettable characters in the history of holiday cinema.

It would be easy to just hand Santa Claus the top spot in this countdown. However, Santa has been presented in so many platforms and his tale told in such a variety of

ways that I think we have to look at each of them individually. In 1994’s The Santa Clause we meet Scott Calvin as a middle-aged marketing executive for a toy company who is also the divorced father of a young son that’d much rather spend Christmas with his mother & stepfather, a well-meaning windbag psychiatrist. It’s a very 90’s origin story. The current Santa Claus falls off Scott’s roof on Christmas Eve, Scott & his son Charlie end up at The North Pole, and Mr. Calvin becomes the new Santa Claus. There are two sequels, but both lack the magic of the original.

While Hans Gruber is a villain in the traditional sense, the two inept thieves in 1990’s Home Alone and 1992’s Home Alone 2: Lost in New York are comic bad guys 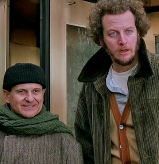 whose foolishness and eventual comeuppance are played for laughs. I am somewhat surprised that they never got their own standalone film.

What a great name!! For those who may be unaware, burgomaster is a 19th century term for “master of the town”, aka the mayor. In the 1970 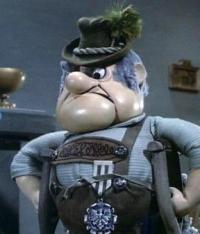 stop motion animated classic Santa Claus is Comin’ to Town he is the evil force that rules Sombertown (another great name) and has banned toys (and we think our politicians focus on the wrong things). Town is a…unique…Santa Claus origin story, but what makes it truly memorable is this awesome bad guy. I mean really…outlawing toys…how mean is that?!?!?!??

There are several memorable characters in the 1964 animated classic Rudolph the Red-Nosed Reindeer, but the brash & bombastic prospector whose mission is to

strike it rich by finding silver and/or gold cannot be ignored. The dude packs heat and has a handlebar mustache for God’s sake!! Very cool. You just know he’s sporting a bunch of tattoos underneath that LL Bean catalog he’s wearing. I’d love to see a Yukon Cornelius spinoff special.

Santa’s wife is kind of interesting to ponder. She’s usually lurking in the background…but she’s almost always there. In the 2002 sequel The Santa Clause 2: The Mrs.

Clause it is even suggested that her role is so vital that Scott Calvin can’t continue being The Jolly Old Elf unless he finds a bride. Mrs. Claus is typically portrayed as a white-haired grandmotherly type who bakes Christmas goodies, is a maternal figure toward the elves, and is a strong & devoted partner to her husband.

There are four ghosts in Dickens’ A Christmas Carol: Christmas Past, Christmas Present, Christmases Yet to Come, & Jacob Marley. All play brief but vital roles in

driving the action forward. Without these ghosts providing the framework there is no story…atleast not one that makes sense.

He’s precocious. He’s kind of a brat. His family is the worst. But when the chips are down this kid is brave & resourceful while standing up to criminals

trying to rob his house (and in the second film trying to burglarize a charitable toy store). Yes the thieves are idiots and yes Kevin could have just called the cops (he ordered a pizza so the phones WERE working), but don’t overthink Home Alone or its sequel because illusions will be shattered. Just enjoy the fantasy of a nerdy little kid kickin’ ass & takin’ names.

Santa’s elves are a vital part of the secular Christmas mythos. They are usually portrayed as a non-descript group of little people hard at work making decidedly old-fashioned toys, but there are exceptions. Will Ferrell brings to life a comically childlike elf named Buddy, who as a baby ended up in Santa’s bag on Christmas Eve and was raised at The North Pole. Of course Buddy isn’t really an elf and eventually he makes the trek to New York City to find his biological father. Hilarity ensues. 2003’s Elf has quickly taken its rightful place on the roster of classic holiday entertainment that we enjoy annually and probably will for years to come. Another elf that achieved that iconic status decades ago is Hermie, a

Linus is one of Charles Schultz’s most fascinating creations. He’s amongst the youngest of the Peanuts gang, his immaturity symbolized by the fact that he still totes

around a security blanket and often sucks his thumb. He also believes in a magical creature known as The Great Pumpkin, something for which even his peers that totally buy the whole Santa Claus thing make fun of him. However, Linus is also sweet & sincere (as opposed to the cynicism of many of the other characters) and oftentimes acts as the thoughtful, virtuous voice of reason. For our purposes he makes the cut because of one simple yet profoundly elegant moment in A Charlie Brown Christmas when he reads the scriptural story of Jesus’ birth from the book of Luke. It is a scene that, even in the 1960’s, Schulz had to fight for, and thank God he did.

“Happy Birthday!!” With those words the creature with eyes made of coal, a button nose, & wearing a silk hat came to life. The tune on which the 1969 animated TV 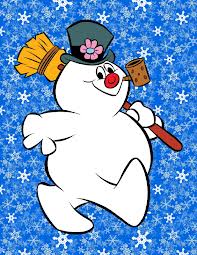 special is based is not actually a Christmas carol, but rather a winter song like Jingle Bells, Winter Wonderland, & Let It Snow that has somehow become inextricably linked to the holiday. It just wouldn’t be Christmas without singing that catchy melody or watching Frosty & little Karen hop on a train to The North Pole.

I’m not really sure I believe in guardian angels, but it is kind of a neat concept. Clarence is a second class angel, a 293 year old clockmaker who has been in Heaven for

over 200 of those years and still hasn’t earned his wings. I’m not sure what privileges first class angels have that aren’t available to guys like Clarence, and it isn’t made clear what exactly one must do to be awarded wings, but I suppose it’s sort of like receiving a Boy Scouts merit badge. Anyway, Clarence, a naïve, somewhat inept being, is given the task of saving suicidal George Bailey’s life in 1946’s It’s A Wonderful Life, one of our most treasured holiday classics. Clarence is almost a live action version of Linus Van Pelt…benevolent, unassuming, and undeniably affable. He’s a breath of fresh air amongst a group of characters that are a mix of arrogant (Mr. Potter), bitter (George Bailey), drunk (Uncle Billy), & just plain mean (Nick the bartender). And most importantly he gets the job done, saving Bailey’s life and finally ascending to the higher class of angels. Maybe he gets access to a jacuzzi and double frequent flyer miles now?? I don’t know.

This feels like an appropriate place take a break. Stay tuned for Part 2…coming soon!!