It has become an annual tradition the past few years for me to kvetch about the peculiar entertainment options offered on TV during the Christmas season. If I were to own or run a station like American Movie Classics or Turner Classic Movies the entire month of December would be dedicated almost exclusively to the plethora of holiday favorites that have been produced over the past several decades. Instead what has become the norm for these channels is to show a meager smattering of Christmas films here & there while still using the majority of their time to broadcast movies that have absolutely no relationship to the holiday season. Who in the heck wants to turn on a classic movie channel in December and watch some crappy 90’s rom-com, a western, or anything starring James Dean?? Not this humble Potentate of Profundity. Anyway, one holiday classic that you will usually see somewhere every year is A Christmas Carol, based on Charles Dickens’ wonderful 1843 novella. The question is which adaptation is being shown?? And for the purposes of this exercise a more important query is which version is worth watching?? In an effort to clarify the matter The Manofesto presents…..

from the home office in Dickens, TX…..

The Superfluous 7 Best Adaptations of A Christmas Carol:

7 Scrooge (1970) starring Albert Finney
I know a lot of people love this version. I like it well enough. However, there are issues. The music isn’t horrible, but no one in the cast is especially talented at 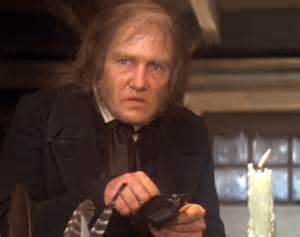 singing. They are the kind of vocalists that get laughed at during the auditions on America Idol. When we are introduced to young Ebenezer’s girlfriend Belle it is said that she is Fezziwig’s daughter. The source material never states that and it seems like an unnecessary alteration. When Scrooge meets the Ghost of Christmas Present it is said that the year is 1860. The book was published in 1843 and almost all other films acknowledge that. Why change it?? The Ghost of Christmas Present sequence leaves out the child specters of Want & Ignorance and also skips over visits to a lighthouse, coal mining shack, & a ship at sea…omissions that aren’t uncommon among Carol films. And let’s talk about Scrooge’s visit to Hell. What kind of cheesy sci-fi schlock is that? However, all things considered, this is an entertaining movie that retains the essence of the story even if it is a bit liberal with the details. Albert Finney was only 34 years old when this film was made yet plays a fairly convincing Scrooge. Sir Alec Guinness…known primarily nowadays as Obi-wan Kenobi in Star Wars…plays the ghost of Jacob Marley, a bit of trivia that I find rather amusing.

6 A Christmas Carol (1999) starring Patrick Stewart
I am a self-proclaimed Trekkie, so of course any adaptation starring Captain Picard is going to make the cut. Stewart has done a one man stage production of Carol

in the UK for many years, therefore it makes sense that he’d star in a full scale movie. This was a made-for-TV film on TNT about 15 years ago, and unlike another television version we’ll get to eventually this one feels…small. The supporting cast is fine but not particularly notable. Stewart’s performance is extraordinary…as are most Stewart performances…but still not especially memorable. It is a fairly faithful re-telling of the story and even includes the scene where the Ghost of Christmas Present shows Scrooge people celebrating Christmas in a lighthouse, on a ship at sea, and a small cabin with coal miners. That is a part of the book left out of too many film adaptations for no particular reason. If you’re a Patrick Stewart fan you’ll probably like this movie. If you’re not a Star Trek: TNG enthusiast and have little affinity for Stewart you may be unimpressed.

5 A Christmas Carol (1938) starring Reginald Owen
This particular adaptation of the story is what most will remember as the cheery one. Some might say it is a bit too jovial, which is seemingly intentional on the part

of the filmmakers. Tiny Tim is quite peppy for a terminally ill child and Bob Cratchit looks pretty content & well-nourished for a man who can barely feed his family and is constantly on the verge of losing his job. At worst he’s kind of a jittery guy, like someone who might want to consider downsizing his daily caramel macchiato from venti to grande. Melancholy aspects of the tale like Scrooge’s fiancée that dumps him when he becomes a greedy money-loving jackass and the ghastly child apparitions of Want & Ignorance are not in the film at all. This is definitely a sanitized version of Carol, but on some level it still works. Owen’s take on Scrooge isn’t particularly noteworthy but neither is it dreadful. I seem to recall seeing this movie on TV a lot as a child which probably explains my affection toward it.

4 Disney’s A Christmas Carol (2009) starring Jim Carrey
This version hasn’t really had time to find a foothold in the collective pop culture consciousness just yet. It may get there one day or maybe it won’t, but I assume it

will receive ample opportunity in the next several years due to its $200 million budget and the hours of effort & skill it had to have taken to put together such a high tech project. I saw the film in a theater upon its release in 2009 and it is a dazzlingly beautiful piece of work from director Robert Zemeckis, the man who gave us the brilliant Back to the Future trilogy. I am a big fan of motion capture animation, and although this movie doesn’t measure up to 2004’s The Polar Express one can clearly see how much the technology has advanced over the years. Jim Carrey…much like what Tom Hanks did in Express…plays multiple roles and does a nice job. I like animated Carrey a lot more than I do real Carrey. The movie stays quite true to the book and that fact alone probably makes it more appealing to me. It is actually a rather dark film at times because the format allows the ominous aspects of the story to be portrayed more artistically than a live action movie might allow. It is kind of surprising how menacing some scenes are. This isn’t a kids’ movie. The filmmakers probably had a little too much fun with their toys and there are moments when I wish they would have dialed it back just a bit, but it’s a small nit to pick.

actors just as beloved American characters…Huck Finn & Tom Sawyer, Jay Gatsby, Batman, Superman, & Spiderman…should be played by American actors. It’s kind of a hang-up with me. That being said, due credit must be given to George C. Scott for a portrayal of Scrooge that has aged quite well and has been shown on television with some frequency only since 2007 when Mr. Scott’s estate sold the rights. Perhaps that two decade time lag is what makes this one of the lesser appreciated versions of Carol. Originally a TV movie on CBS, it has a big screen vibe that makes it feel significant. Scott’s Scrooge is more of a cunning & merciless business tycoon than a bitter old geezer, a subtle yet intriguing departure. It is a fairly austere, decidedly gimmick-less version, which is a refreshing rarity. There are minor omissions & variations from the source material, but nothing that is glaring or unforgivable.

2 The Muppet Christmas Carol (1992)
I pondered whether or not to include this movie at all, but ultimately decided that its magnetic charm cannot be overlooked. My preference for the perfect A

Christmas Carol adaptation is a straightforward, high quality, authentic rendering of Charles Dickens’ story. No animation. No song & dance numbers. No gender bending. No omissions of key characters or plot points. No additions or “fleshing out” of things barely alluded to in the book. Unfortunately, for whatever reason, that seems to be an almost impossible task to accomplish. Having said that, I have, over the years, opened my mind just a bit and accepted some unique interpretations on their own merits. Those of us that grew up in the 70’s & 80’s were blessed to have Jim Henson’s Muppets as a ubiquitous part of our childhood, and probably one of the greatest Muppet productions of all time is this take on A Christmas Carol. Is it faithful to the book?? Well…more than one might expect. I mean sure…it is so family friendly that it makes the 1938 Reginald Owen version look like a snuff film from Sam Peckinpah, but that’s okay. It’s fun, which isn’t a bad thing. I love the narration & running commentary from Gonzo the Great (as Charles Dickens) and Rizzo the Rat. Kermit the Frog is a fine Bob Cratchit. Michael Caine…one of the few “real” actors in the film…gives quite possibly one of his best performances as Ebenezer Scrooge. Music adds some unobtrusive levity yet the dark nature of the original story isn’t completely lost. Like most Muppet movies this one is amusing & will warm the cockles of even the coldest heart.

1 Scrooge (1951) starring Alastair Sim
This is generally considered one of the best adaptations of the Dickens novella by most critics…whoever “they” are. For me it rises to the top spot kind of by default. 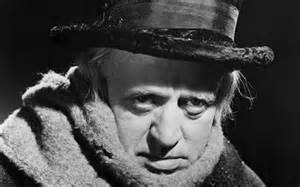 I won’t award an animated/musical/cartoon version the #1 spot. I just can’t do it. That narrows it down quite a bit. The 1938 Reginald Owen movie leaves too much out and gives the source material a tonal lobotomy. It is a fine film on its own merits but cannot be #1. It is a testament to George C. Scott’s brilliance that his Ebenezer Scrooge is thought of by many as definitive, however I cannot give the honor to a made-for-TV movie that was largely inaccessible to the public for over two decades and stars an American actor in a uniquely British role. So we are left with the film that would probably win most polls anyway. However it is not without flaws. An entire subplot is added in which young Scrooge & Marley thrown in with a shady businessman named Mr. Jorkin and leave old Fezziwig in the dust. Later on the crooked Jorkin’s legal problems lead to success for Scrooge & Marley. It’s not horrible background material…it just isn’t in Dickens’ novella. For some reason Scrooge’s maid Mrs. Dilber gets a lot of airtime in the movie as well. Again it isn’t necessarily bad character development…just not faithful to the book. And for no apparent reason whatsoever young Scrooge’s fiancee’s name is Alice instead of Belle. I am sure that someone somewhere had a reason for making that change 65 years ago, but I hate stuff like that. It makes it seem as if the people who were getting paid to make the movie couldn’t be bothered to read the book first. At any rate, even with those issues this is still a great film. It retains the solemn (at times forbidding) tone of the story, and Sim is uniquely memorable in the titular role. He has a singular appearance that allows him to convincingly exhibit both sides of the Scrooge coin…the bitter & lonely old miser who is then transformed and joyously embraces a second chance. The supporting cast is solid if not all that remarkable. If/when Hollywood ever decides to do another big screen remake of A Christmas Carol this is the one they should emulate.