Faithful citizens of The Manoverse might be surprised at what I am about to do. I’ve made quite a few disparaging remarks about television over

the years, and I stand by everything I’ve said. As we’ve gotten more channels it seems as if the quality of the product has been watered down. Also, as my friend The Owl has stated, TV shows now reflect the “spirit of the age” and have become noticeably darker. The level of violence & sexuality, as well as the language that is shockingly acceptable now as opposed to when I was a kid, has, in my humble opinion, been amped up to the point that superior writing & acting are too often overshadowed. However, having said all that, I feel this decreased excellence makes it even more imperative to recognize what we have lost and give kudos to what was…and rarely is…good.

A few things that I need to cover before we dive in:

Just as is the case with my taste in movies, I prefer television shows that can put a smile on my face. Therefore you will not be seeing a lot of…if any…cop shows or medical dramas. They just don’t frost my cupcake. I’m more of a traditional 30 minute sitcom kind of guy. Also, I was born in the early 70’s, grew up in the 80’s, and went to college & entered “the real world” in the 90’s, so this list will be heavy with shows from around the late 70’s thru the 80’s. Reruns introduced me to a few entrants from before I was born that make the cut, but they are exceptional gems indeed. In some cases I have fond yet vague memories of shows that were on when I was a young child,

meaning that had I been 5 or 10 years older they might be more highly rated…but I wasn’t so they aren’t. As a writer I notice good writing and did so…even if it was on a subconscious level…even as a youngster. With few exceptions I am not including shows still currently on the air. As much as I currently enjoy The Big Bang Theory and How I Met Your Mother I just can’t put them on an all-time type of list until I see how well they stand the test of time. In contrast to my 100 Favorite Movies list that was presented in groups of five, this endeavor encompasses only 50 shows and will be presented in five entries of 10 shows each, so the process won’t drag out nearly as long. There are just too many other things I want to spend my time writing about to expound excessive energy on one project. That doesn’t mean this venture won’t get proper attention & enthusiasm, just that I have learned to be more efficient.

I think a good way to begin, just as we did with the 100 Favorite Movies, is with a dozen honorable mentions (listed alphabetically) that, for one reason or another, didn’t quite make the cut:

I don’t think I ever watched Ted Danson’s post-Cheers comeback during its run on CBS from 1998-2004, but syndicated reruns sure kept me a lot of company during My

Unfortunate Incarceration of 2006-08. I really like Danson’s irascibly misanthropic yet benevolent doctor character. For some reason he reminds me of someone.

You’re singing the theme song right now, aren’t you?? Honestly, who hasn’t seen almost all 117 episodes of the classic 1969-74 sitcom in syndicated reruns?? Now if you’ll

excuse me I’ve got a lot of errands to run: feed Tiger & Fluffy, see if I still fit into the Johnny Bravo suit, judge the cheerleading competition between Marcia, Jennifer, & Pat, pick up some meat from Sam the butcher, and find Cindy’s Kitty Carry-All. Thank God It’s A Sunshine Day. Groovy!!

For some reason I remember being so in love with middle daughter Susan and being so bummed when she married Merle. Of course I was only 7 years old. I think this one

might have snuck into the Top 50 if I had been ten years older.

Just like The Brady Bunch, this show has one of the most memorable theme songs in television history. And just like the Bradys, this show came & went

before I was even born but reruns were so ubiquitous in the 80’s that a whole new generation got to know the crew & passengers of the SS Minnow and join in the antics following their ill-fated 3 hour tour. You can keep your Lost and Survivor…I prefer to hang out with these castaways.

eye, this is one of those shows that benefited mightily from syndication and has been enjoyed by multiple generations. I always got a kick out of it when I was a kid. Goooollly…shazaam indeed.

I suppose a show about a well-to-do black family (they even had a maid!!) seemed edgy in 1975 when it was 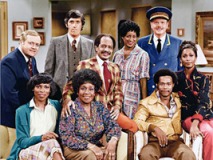 spun off from All in the Family. When I was watching it during the second half of its decade long run in the early 80’s it was just good solid fun.

Any show that kickstarted the amazing career of the awesomely talented

Robin Williams has to atleast be in this conversation, right?? Nanu nanu…Orson…come in Orson.

Oh what might have been. This show was only on for 5 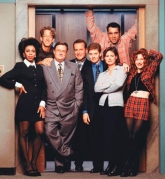 seasons during the late 90’s, but it had the potential to last so much longer and be so much better. Unfortunately NBC kept changing its time slot, which has a tendency to thwart the momentum of even the coolest shows. Then star Phil Hartman was tragically murdered, making the 5th (and final) season really odd to watch. It didn’t help that Jon Lovitz…who I’ve never found funny…was brought in to replace Hartman. At its best NewsRadio was reminiscent of another radio station based comedy, WKRP in Cincinnati. But throughout its run the writing was uneven and just never lived up to expectations.

As noted, I’m not really a huge fan of what they call police procedural dramas, but this one was pretty good. It was probably on the air atleast 2 or 3 years longer than it 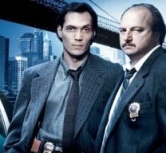 should have been and suffered from too many cast changes, but in its heyday during the mid-to-late 90’s it was good solid entertainment.

neurotic cousin in Chicago. This was a Friday night staple from 1986-93. Deep, meaningful television?? Maybe not. But it was good old-fashioned comedy comfort food.

Saved By the Bell

Corny?? Cheesy?? Poorly written with subpar acting?? An 80’s relic?? Yes to all of the above. But since I was never a big fan of cartoons I 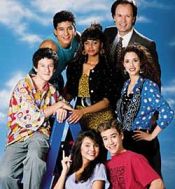 was always open to alternative programming on Saturday morning, and this was a perfectly digestible bit of fluffery when I was in college and usually hungover all weekend.

Writer/producer Aaron Sorkin is now an Oscar winner with numerous hit shows & movies to his credit, but 15 years ago his fast paced, rapier sharp dramedy about an

ESPN-esque sports show was just too ahead of its time to be embraced by the masses and lasted just two seasons. If the ratings had been better and it had been on the air several more years I have no doubt it’d be in the Top 50.

You live by the sword, you die by the sword. This tale of a group of Brooklyn high school degenerates helped launch John Travolta into

superstardom. However, Travolta’s fame led to him moving on to films like Grease & Saturday Night Fever, which essentially killed the show. It originally aired in the late 70’s when I was just a bit too young to really appreciate the humor, but I’ve always enjoyed the reruns.

2 thoughts on “Introduction to My 50 Favorite TV Shows”