Sequels, though not uncommon throughout the history of film, really hit their stride in the 1970’s with the success of follow-ups to movies like The Godfather & Jaws and the insatiable urge to turn huge profits into even more money. These days it seems like a sequel is oftentimes inevitable, regardless of whether or not the quality of the original deems it obligatory. It is a hit or miss proposition, but Hollywood appears to be creatively bankrupt to the point that more often than not the powers-that-be prefer to squeeze a few more dollars out a known entity rather than roll the dice on a new idea. Anyway, there are three types of sequels. Sometimes only one additional movie is made to tie up any loose ends from the first, or maybe it is just that the second film bombs so badly that no sane person would green light a third. Examples would be 48 Hours and Another 48 Hours, Analyze This and Analyze That, Fletch and Fletch Lives, Grumpy/Grumpier Old Men, Kill Bill Volumes 1 & 2, Weekend at Bernies 1 & 2, & American Graffiti and More American Graffiti. A much more common modus operandi is the trilogy, which is of course three films. Everyone knows about trilogies. Star Wars/The Empire Strikes Back/Return of the Jedi, The Lord of the Rings Trilogy, Back to the Future 1,2,&3, The Santa Clause 1,2,&3, and The Austin Powers Trilogy (International Man of Mystery, The Spy Who Shagged Me, & Goldmember) are among the best in my humble opinion. And then there is the ultimate in avarice and indolence, the series, which I define as four or more films. At some point these usually become a complete joke, which in turn leads to even more movies in an effort to somehow right the ship and recover some semblance of dignity. The four Batman movies from the late 80’s early 90’s (Batman, Batman Returns, Batman Forever, and Batman & Robin) suffered from an ever changing lineup of directors and leading men. The original Die Hard and the third entry, Die Hard With A Vengeance, were excellent, while Die Hard 2 was subpar and Live Free or Die Hard (the fourth film) was fun but forgettable. The Harry Potter series has thus far been pretty decent, but the movies aren’t nearly as good as the books. The Halloween series should have never made it past Halloween II. Parts 3-6 were horrible, H20 and Resurrection too little too late. And of course Rocky and its sequel were legendarily awesome but someone somewhere actually thought the four films that followed were a good idea (they weren’t). I won’t even get into the absurdity of horror franchises like the eleven Friday the 13th films or the eight Nightmare on Elm Street flicks.

At any rate, I go into all that as an explanation regarding my process when looking at these types of films and how I choose to fit my favorites into this Top 100. In a perfect world I would treat each the same, applying a set of rules that applied to all. But I have found this to be very difficult. If there are two films, maybe I like one and not the other (Caddyshack is appropriately celebrated…Caddyshack 2 not so much). Maybe I like both (Father of the Bride 1&2). I tend to keep trilogies together, as they generally have a “big picture” that is hard to ignore, regardless of whether their individual parts may vary in quality (Star Wars, Back to the Future). But even this isn’t always the case (Oceans’ Eleven and 13 are great…Ocean’s Twelve isn’t). Series are almost the opposite of a trilogy in that, generally, one must look at each individual piece and it is next to impossible to like all the parts (Star Trek) to the point that they can be viewed as a whole…but sometimes the whole is greater than the sum of its parts (Lethal Weapon). I felt it necessary to clarify my thoughts on these matters because I am aware of the inconsistencies inherent in the choices I have made.

Since today’s intro is longer than usual, and in an effort to stay within the confines of the theme, we will only look at the next two entries instead of five, as they are what inspired me to write this detailed preface in the first place.

It is pure coincidence that I happen to be writing about Lethal Weapon right when Mel Gibson is going through his latest public embarrassment. I have learned to separate my personal opinions about the lives of Hollywood stars from my enjoyment of their work. This became necessary over the years, as I am a hardcore conservative and the vast majority of folks we see on our televisions and on the big screen are so out of touch with average America’s principles that if I let it interfere with my entertainment I’d never have any fun. So anyway…there are four films in the Lethal Weapon canon, released between 1987 and 1998. The concept is your typical odd couple story, with Danny Glover playing Murtaugh, a curmudgeonly family man on the verge of retirement from the police force, and Gibson playing his new partner Riggs, a younger, crazier cop who has 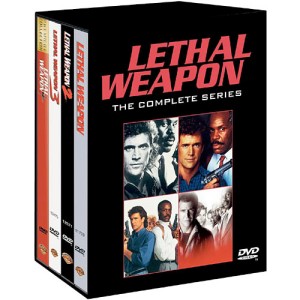 nothing to lose after the tragic death of his wife. Throughout the series we see the relationship between the two men grow, from distrust and antagonism to being best friends and brothers-in-arms. Each film provides a different big case for the duo to solve with the requisite bad guy steering some sort of nefarious plot. I am typically not a big fan of guns, car chases, and explosions simply because there are too many movies with only those things and no plot or character development. Lethal Weapon is an exception. Not only do we cheer for Riggs & Murtaugh, but throughout the series we get to know Roger’s wife and three kids, some supporting characters at the police department, a reformed whistleblower turned private investigator played by the always enjoyable Joe Pesci (introduced in Lethal Weapon 2 and present in the two films after), and a lady cop played by the lovely Renee Russo who flirts with Riggs in Part 3 and is having his baby in Part 4. The details of each caper aren’t really important. I even get the details of the various plots mixed up sometimes, forgetting which event happened in which movie. But it’s all good. Lethal Weapon is the rare action flick that also allows us to get to know our heroes and their loved ones, which is what separates it from the pack. Admittedly the first film is the best (it is even…if one is willing to really stretch the definition…a Christmas movie) and there has been much debate as to whether the fourth was one too many, but I prefer to look at the series as a whole because even the declining quality of the last two does not mean they were bad. Fans have been clamoring for a fifth installment for several years, but both stars have said no. I think it is likely that the franchise will be rebooted at some point, either as a total remake or with younger actors playing new characters who have some sort of minimal interaction with Riggs & Murtaugh to justify using the Lethal Weapon name. If/when that day comes I suppose I will check it out, but I can’t imagine it getting any better than the original.

I have to give a shout out to my friend The Owl for turning me into a Trekkie. I was somewhat familiar with Trek, but when we were in college he really made me appreciate how cool the concept was. This was right in the midst of the popularity of Star Trek: The Next Generation in the early 1990’s. I became a fan of that show first and then went back and got into the original series and the movies. I suppose that is sort of an odd, backward way of becoming a Trekkie, but that was my experience. There were six films made starring the original crew of The Enterprise we first met in the 1960’s television show (Captain Kirk, Spock, Bones McCoy, Scotty, Chekov, Uhura, and Sulu). Three of those six appear in this list. The Wrath of Khan is almost unanimously the favorite amongst fans. 1979’s Star Trek: The Motion Picture had

reunited the cast and fans were ecstatic after a ten year absence following the abrupt cancellation of the TV show. But let’s face it…The Motion Picture was not that great of a movie. The second installment rights the ship to say the least. From opening with the infamous no-win Kobayashi Maru test to the heartbreaking death of Spock, Wrath of Khan is a total immersion experience for Trekkies. In between those bookend events we get the antics of very pissed off supervillain Khan Noonien Singh who was cryogenically frozen in the 20th century, reanimated by Kirk and friends in an episode of the TV show, and banished to a desolate planet after he tried to stage a coup of the Enterprise. Khan and Kirk engage in a battle with distinct Moby Dick overtones when Khan tries to steal the technology for The Genesis Project, a terraforming device able to create new and inhabitable planets. Genesis is the brainchild of Kirk’s former lover and what turns out to be his heretofore unknown son. Wrath of Khan is not your typical action flick. There is a story, there are grand themes about vengeance and death, and there is some real depth and a range of emotions from the characters. There is even some humor provided by the always sardonic Dr. McCoy. Because The Motion Picture bombed the studio stepped in, removing Trek creator Gene Roddenberry from the helm of this movie and restricting the budget significantly. I am sure those were hotly debated controversies at the time, but no one can argue with the results.

And let me take this opportunity to say that I have seen the 2009 reboot of the Star Trek franchise and enjoyed it very much. Because of its newness it will not be making an appearance on this list, but I anticipate that it will likely make the cut in 5 or so years when I do this all again.