October is often thought of as the best time of the annual sports calendar because the NFL, NBA, World Series, hockey, & college football are all available to us. However, late spring & early summer…with the NBA & NHL playoffs, a little golf, the Indy 500 & Coca-Cola 600 both on Memorial Day weekend, & baseball all happening…ain’t too shabby. Let’s discuss.

At the beginning of the NBA playoffs my only wish was that two of three teams not advance to The Finals. Things got off to a good start when the aging San Antonio Spurs were eliminated in the first round. Heading into the Memorial Day Weekend it seemed plausible that my hopes would be fulfilled and we’d get a fresh & interesting championship matchup. Sadly that dream died in two Game 7s, and now…for the fourth year in a row…we’re stuck with Golden State vs. Cleveland. I realize that many basketball fans are excited about this, but I am not your average NBA fan. For a variety of reasons I will not be watching one single second of the series. Maybe next season Philly, Boston, New Orleans, Houston, & Minnesota will figure some things out and break up the monotony.

I am surprisingly ambivalent about the NFL’s new anthem policy. I once called kneeling during the national anthem a “meaningless exhibition of symbolic rage” and stand by that opinion, but I also opined that it is within players’ Constitutional rights to do so. It isn’t something I would do, the original intent of the protest is foolish, & its stated purpose had been hijacked into a political game of chicken…but as disrespectful as I believe kneeling is I’m not sure the NFL has handled the situation all that well. They did nothing at the height of the controversy last season, and it felt like the whole circus had sort of diminished much like a hurricane eventually loses steam…until the NFL

stirred things up again for no reason. Young parents are often taught the Ferber Method in which a crying infant is to be left alone and eventually they’ll quiet down. In the same way, I think if fans & the media would stop paying attention to anthem protests the players would get bored with it and move on…and even if they didn’t stop atleast they & their “cause” wouldn’t be receiving any validation. Unfortunately the NFL decided to poke the whiny, spoiled, & sanctimonious bear.

Y’all know that I’m a really lukewarm hockey fan, and whatever interest I did have in the NHL playoffs pretty much disappeared when the two time

defending Stanley Cup champion Pittsburgh Penguins were eliminated. That being said, I am rooting for Vegas to bring home The Cup in its inaugural season. Former Penguins’ goaltender Marc-Andre Fleury now plays for the Golden Knights, and I also think it’d be fun to see an expansion team win because it would tick off hockey “purists”. There’s also my longstanding love of Las Vegas, a city I hope to visit someday. I’m not actually going to watch any of the games, but for what it’s worth…Go Vegas!! 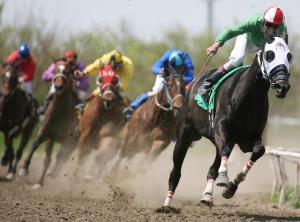 How insane is it that we went 37 years between the last two Triple Crown winners, but now we could see another one just three years later?? Of course it must be noted that between Affirmed’s achievement in 1978 and the 2015 trifecta of American Pharoah there were 13 horses that won the Kentucky Derby & Preakness Stakes only to fall short in the Belmont Stakes, so it’d be premature to assume that Justify will wear the proverbial crown. Not only is Belmont the longest of the three races (the Derby is 1.25 miles, the Preakness is 1& 3/16 miles, & the Belmont is 1.5 miles), but there are always fresh horses entered that didn’t run in the previous two races. As a matter of fact, it is fairly common for only a few horses to run all three Triple Crown races, with several in the Belmont field having skipped either the Derby, the Preakness, or both. For this reason the “smart money” might lean toward one of those horses instead of Justify.

Perhaps I am missing something, but I don’t understand all the hype and/or consternation about The Supreme Court’s recent decision against the Professional and Amateur Sports Protection Act. That 1992 law “barred state-authorized sports gambling with some exceptions”, making Nevada the only state where it was legal to wager on games, but now all bets are off (pun intended) and it’s a free-for-all gambling frenzy. But wait!! Haven’t we had The Internet for the past quarter century?? I’m not a big gambler, but I have bet on the Triple Crown horse races online for several years, and could have bet on just about anything else if I’d chosen to do so…so what’s the big deal?? Are casinos suddenly going to pop up everywhere now?? I suppose that’s possible. Will all of those little “gambling cafes” that litter the landscape of my small hometown now offer sports betting in addition to slot

machines?? That would actually make such establishments somewhat more interesting. I’m not completely obtuse here folks…I get it. But let’s not pretend that this new legality suddenly allows people to engage in some sort of forbidden activity that they’ve been dying to try but have been prohibited from doing. The truth is that gambling has been a huge business for decades, and not just in Vegas or Atlantic City. The Supreme Court has just brought it out of the shadows…probably so the government can get a piece of the action.