Howdy. Holy cow have we had a lot going on in the sports world. It’s times like the last few weeks that I really feel bad for those who, for whatever reason, never became sports fans. They’re really missing out on so much fun. Of course they miss out on an abundance of frustration & heartbreak as well, so there is that. Anyway, let’s roll. 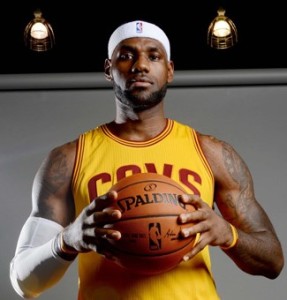 A year & a half ago I said that Lebron James would “have the Cavs in the playoffs this summer and in serious championship contention next year.” He exceeded my expectations by leading them to the NBA Finals in 2015 before ultimately losing to the Golden St. Warriors. And this year he finally took them all the way. In a series rematch from last season the Cleveland Cavaliers fell behind against the Warriors 3-1 before staging an epic comeback and winning a fantastic Game 7 to earn the trophy. I am sincerely happy for the fine folks in Cleveland, OH, although I’d be remiss if I didn’t point out that between the Browns winning the NFL championship in 1964 and the Cavs winning the NBA title this year…a drought of 52 years and over 200 major professional sports seasons…the City of Champions Pittsburgh, PA won 13 championships among the Steelers, Pirates, & Penguins. Sorry…I couldn’t resist.

Speaking of the Penguins, kudos to them for winning their 4th Stanley Cup in the last quarter century. As predicted the series did

go seven games. I need to correct an error I made in the last edition of W&M. As it turns out the last several games of the finals were played on NBC proper, as it should be. I’m not sure what the deal was with those first couple of games being shown only on the NBC Sports Network.

Finally our long national nightmare that was the Skip Bayless era at ESPN is over. Bayless is taking his shtick to Fox Sports 1, where I am sure they’ll pair him up with some other obnoxious character and try to duplicate the First Take debate formula. Personally I won’t be watching. How Bayless has any credibility whatsoever remaining is a complete mystery since he has been demonstrably wrong the vast majority of the time in the past decade. I am quite sure that FS1 will see a spike in ratings upon his debut, but I’d be shocked if the honeymoon lasted more than a few months.

Now that the NBA Finals have concluded the chess match that is the offseason can begin,

with the first move being the NBA Draft in a couple of days. It isn’t nearly as entertaining as the NFL Draft, but I suppose I’ll watch. As for free agency, I’m going to go out on a limb and predict that Kevin Durant will leave Oklahoma City and end up with…the Los Angeles Lakers. You heard it here first.

Admittedly I lost a good bit of interest in the U.S. Open Golf Championship once my man Phil Mickelson missed the cut. This was supposed to be Lefty’s year to win the only major that has eluded him, the one in which he has finished second a record 6 times, but it just didn’t happen. That being said, I think the future of golf is going to be just fine. The final round of the U.S. Open was great theater, although it could’ve ended up being quite messy. Early on in his round leader Dustin Johnson had a situation where his ball appeared to move ever so slightly. A few holes later USGA officials informed Johnson that he may or may not incur a one shot penalty. He had to play the last several holes…of a major…not knowing exactly what his score may be. What?? Seriously?? How freakin’ stupid!! It’d be like telling an NFL team that a 2nd quarter touchdown may or may not count once a potential pass interference call is reviewed after the game, or an MLB team that a 4th inning grand slam may or may not have really been a foul ball and that a final decision would be made after the last out of the contest. Of course that would NEVER happen!!!!Decisions in most major sports might be endlessly analyzed & questioned after the fact, but atleast there is a damn 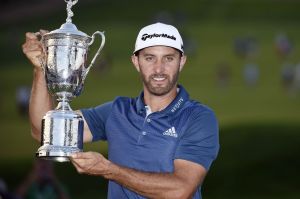 decision. I know golf is a quirky game, where players are expected to self-report any rules violations and must accurately keep score themselves or else be disqualified, but the situation that occurred at the U.S. Open was shameful. Despite what purists may think there needs to be serious reflection about how to avoid such debacles in the future. Thankfully Johnson kept his cool and won by more than one stroke, leaving the outcome beyond doubt. Otherwise a great game could have suffered a terrible and 100% preventable stain on its legacy.