I know I said I wasn’t going to watch The Super Bowl, but I did…kind of. The Owl called me about a half hour before kickoff and we talked until midway thru the 4th quarter. The game was on but my TV was muted. However, thanks to modern technology I was able to go back and fill in some blanks so I could knowledgeably pontificate on all related matters. The things I do for my peeps. You’re welcome.

I didn’t have any major issues with Idina Menzel’s rendition of the national anthem. I’m not a fan of Menzel’s distracting odd-shaped mouth or the fact that she unleashed Let It Go on an unsuspecting populace, but atleast she didn’t forget the words like Christina Aguilera four years ago.

It seems like the best Super Bowl commercial is the one that didn’t air. GoDaddy.com (a company I despise because of their idiotic name) produced an ad that mocked Budweiser’s sentimental puppy commercials, during which a little dog runs away but returns only to have the owner say she’d just sold him online with a website she created thru GoDaddy. It was a clever parody. But unfortunately we live in the United States of the Offended, a nation that seems to have lost our collective sense of humor. A bunch of pansies started an online petition demanding that the ad be pulled, a petition that stated that GoDaddy was “encouraging private breeding/puppy mills while shelter animals wait patiently for their forever homes” and also railed

against online transactions involving pets because the animal “could be sold to someone who runs a fighting ring, someone who abuses animals, or someone who cannot adequately care for an animal.” Oh please…get a freakin’ grip people!! I could walk out of The Bachelor Palace and be struck by a meteor. I could go on a blind date and find out the potential mother of my children is a homeless transvestite serial killer with a drug & alcohol addiction. I could traipse all the way to the local grocery store specifically to purchase a gallon of skim milk only to find them sold out of everything but half gallons of 2%. It’s called life!! Look, I am not minimizing the value of responsible pet ownership. I know several people who have rescue pets and folks that foster on a regular basis. I’m down with the jive. I love my dog more than just about anything in the world. But this is a nationally known company that paid $4.5 MILLION for a 30 second ad during the Super Bowl and because a bunch of bored bleeding hearts got their knickers in a twist was forced to hurriedly produce and air a subpar commercial. They certainly didn’t get their money’s worth. Can’t we all just lighten up?? Laugh a little. Learn to take a joke. You’ll live longer. 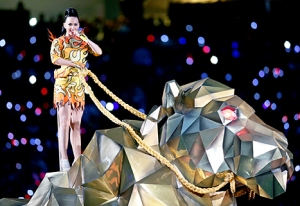 Katy Perry’s halftime show was…okay. Perry, a fallen preacher’s kid who has turned her back on The Lord and embraced 21st century whore culture, is a lovely young lady that has put out some catchy tunes (amongst the other things she has put out), but I’m not the target audience for her act. Lenny Kravitz wasted his time & talents by even showing up, and I didn’t know who that fat rapper dude was that popped in. It was a visually creative spectacle, especially at the end when Perry flew off on the star from the “The More You Know” PSAs that used to air on NBC in the 90’s. I am sure that teenage girls and massive amounts of 20-somethings with no taste are going to trumpet this as the greatest Super Bowl halftime show EVER…but I’ll take Springsteen, McCartney, Prince, dead pedophile Michael Jackson, or even Justin Timberlake & Janet Jackson’s old saggy nipple any day of the week.

How big of an idiot is Seattle head coach Pete Carroll, not to mention offensive coordinator Darrell Bevell?? I’m pretty old-fashioned when it comes to 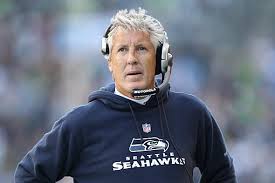 football. I suppose spread offenses & dual threat quarterbacks are fun to watch, but at the end of the day if you can’t hand the ball off to your running back at the 1 yard line and ram it down the defense’s throat for a touchdown then you don’t deserve to win. Throwing the ball in that situation is insane, and no explanation can logically justify the play that was called. I am certainly no fan of Seahawks’ RB Marshawn Lynch. He made a complete jackass out of himself in the weeks leading up to the Super Bowl. Having said that though, if Lynch is in your backfield at the 1 yard line GIVE HIM THE DAMN BALL!!!! And if that fails I think QB Russell Wilson is a pretty good second option. Get him out in space. Let him try to find an open guy, or if nothing is available he can throw the ball away. I don’t know how many offensive plays are in a typical NFL playbook, but I have to believe that in a list of options the play that was called would have to be dead last. Carroll can no longer be taken seriously as a head coach on any level, and Bevell…once thought to be a potential future head coach…may have just irreversibly torpedoed his career. 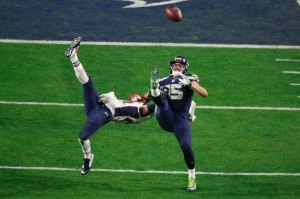 You know who I feel sorry for?? Seattle wide receiver Jermaine Kearse. Kearse made an amazing juggling catch that put the Seahawks inside the 5 yard line with about a minute remaining in the game. That catch should be…and would have been…remembered as one of the greatest catches in Super Bowl history. It was spectacular. Sadly, due to the stupidity of the “braintrust” that called Seattle’s final offensive play, Kearse’s incredible reception will just kind of disappear into the ether, as if it never happened at all.