My Dad has always told me “you may not get your way but you can get your say”. It’s wisdom along the same lines as “well, the worst they can do is say no” and closely related to “an opinion is like an @$$^*!#…everyone has one”.

In fact, The Constitution of the United States guarantees that everyone can “have their say”, express their opinion, etc. It’s called The First Amendment. However, like other parts of The Constitution, there are folks in 21st Century America that want to cherry pick the parts they like and discard the ones with which they do not agree (much like how The Bible is treated). There is a not insignificant minority of people who would like to see guns banned, even though The Second Amendment guarantees our right to keep and bear arms. Christians

have stood by and watched as God has been pushed aside in the most asinine of ways over the course of the past few decades, with the PC crowd citing The Establishment Clause of The First Amendment (“Congress shall make no law respecting an establishment of religion”), while conveniently forgetting the second half of that sentence that says “or prohibiting the free exercise thereof “. All manner of controversial issues…taxation, same sex marriage, abortion, capital punishment, affirmative action, etc…are, at their core, a tug of war wherein The Constitution is used and misused, bent, twisted, and shaped to fit whatever argument is being made by any particular side.

The question becomes, is The Constitution really that difficult to understand?? I don’t think it is.

There have been two things in recent weeks that have grabbed my attention in relation to The First Amendment, and more specifically, peoples’ understandable but troubling disregard for it. But before I dive into those issues in particular let me refresh the collective memory of the masses by spelling out exactly what The First

Amendment says. The First Amendment states that “Congress shall make no law respecting an establishment of religion, or prohibiting the free exercise thereof; or abridging the freedom of speech, or of the press; or the right of the people peaceably to assemble, and to petition the government for a redress of grievances.” There is a lot of good stuff in there ladies and gentlemen. I already mentioned how Freedom of Religion has become Freedom from Religion, especially if that religion is Christianity. But my focus now turns to the Freedom of Speech.

“Freedom of Speech” is admittedly rather vague terminology, but essentially it means that we all have the right to say anything about anyone, even if it is critical or negative, so long as it isn’t slanderous, obscene, or may insight violence. And even those exceptions are so narrowly defined that a lot of things may be offensive but still within the realm of legality. That very restricted piece of no man’s land…offensive vs. unconstitutional…is the battleground that brings about this particular diatribe.

The U.S. Supreme Court recently ruled on a case involving the Westboro Baptist Church. This is a church in Topeka, Kansas that has gained a certain amount of infamous notoriety in the last couple of decades for traveling around the country to protest at funerals and other gatherings, expressing very clearly their anti-homosexuality beliefs. Basically they hate everyone, including every other religion and all Christian 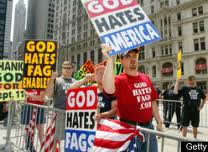 denominations and churches except their own, and believe that President Obama is The Anti-Christ and Pope Benedict XVI is The False Prophet. Obviously they have not been informed that Oprah is The Anti-Christ. Anyway, I think it is safe to assume that an overwhelming majority of Americans from every corner of the sociopolitical spectrum and all religiosities would likely find the activities of this “church” appalling. I don’t feel like I’m stepping too far out on a limb by saying that there might be more unanimity on this than just about any other topic, including the relative merits of Justin Bieber’s career or the entertainment value of Vin Diesel films. The Court ruled in favor of Westboro, saying that their protests are protected free speech. Not surprisingly this is a tough pill to swallow for many, but it gets to the heart of the matter. The Constitution protects (almost) ALL speech…not just the stuff with which we agree.

Another situation is more local. A few weeks ago here in northcentral West Virginia a young U.S. Marshal was shot and killed by a suspect on whom he was trying to serve a warrant. I did not know the young man, but we apparently had a lot of friends in common. The overwhelming sadness of the tragedy cast a pall over this area for days. The outpouring of love and respect for the fallen hero and his family was amazing. However, there are always a few dissenters. One of the local TV stations had an article on their website about the shooting, and the vast majority of the comments after the article were supportive, sympathetic, and respectful. Unfortunately a few

weren’t, and not only called into question the tactics of law enforcement in general and this deceased officer in particular, but were downright repugnant and insulting on a variety of levels. The whole thread got really ugly, and was made worse by the response of those who were, undoubtedly in good faith, coming to the defense of the officer, his family, and the police as a whole. Was there good reason to be upset and even disgusted?? Absolutely. But there were demands, both on the station’s website and its Facebook page, to delete the comments. Someone even blamed one of the news personalities who hadn’t done anything wrong and by all accounts is a genuinely good guy. A tragic story was made worse by idiotic fools who seemed to be getting their jollies by stirring the pot and making inflammatory statements, but it wasn’t helped by well intentioned yet misguided individuals seeking to spit on The Constitution and suppress free speech.

The theme song for an old 80’s sitcom said “you take the good, you take the bad, you take them both and there you have The Facts of Life”. That is a good summary of freedom, justice, The Constitution, our government, and our nation. Is it all perfect?? No. With gun ownership comes the unfortunate result that sometimes people are going to get shot. Democracy doesn’t mean that we will always agree with everything our elected leaders do. Sometimes an innocent person will be sent to prison and the guilty will go free. We take the good with the bad because most of the time things go right and in comparison with every other nation in the world America has far and away the very best system available. The opening words of The Constitution say “We the People of the United States, in order to form a more perfect union, establish justice, insure domestic tranquility, provide for the

common defense, promote the general welfare, and secure the blessings of liberty to ourselves and our posterity, do ordain and establish this Constitution for the United States of America.” Notice that one of the goals is not to form a perfect union but a more perfect union. The Founding Fathers knew that nothing is perfect, but that there is nothing wrong with striving for perfection. We cannot have freedom a la carte, picking & choosing what we like and what we do not. Freedom of Speech means that sometimes we might not agree with what is being said, but we must find some way of dealing with it besides trying to squash the freedom itself. It would be great if everyone was polite, courteous, and appropriate, but it is an irrefutable fact that there are a lot of people who are either stupid, mean, or both. And sometimes two people are just going to disagree about something, whether the issue is big or small, with neither individual necessarily being right, wrong, or evil in any way. In America even the folks who are wrong and not very nice about it have the right to be wrong and not very nice. We must be extremely cautious not to throw the baby out with the bath water.

I wish groups like the Westboro Baptist Church didn’t exist, and that everyone who decides to express their opinion would do so in a manner that was respectful and gracious, but that just isn’t realistic. Utopia, Paradise, Eden, or whatever you might refer to it as went out the window the second Eve was beguiled by Satan and nibbled on The Forbidden Fruit. So we must deal with the world the best way we know how. The Founding Fathers…although not perfect men themselves…established freedom & liberty as the bedrock of these United States, and it works better than anything else out there. We should never stop seeking a more perfect union, but we also need to stop being so cavalier toward the level of excellence we have already achieved.

One thought on “In Defense of The Constitution”