I was wrong, and I am not afraid to admit it. That’s not really difficult since it happens so rarely.

Anyway…in June of last year I published the second part of my plan to save college football, detailing

how I would abolish all existing conferences and put each team into one of 10 regions, with the ten regional winners + 6 at large teams making up a 16 team playoff. However, in pondering the situation as the 2010-11 season has unfolded before my eyes, I have made a significant revision. I think it would be preferable and allow for much more flexibility to only have 5 regions, with the five winners + 3 at large teams comprising an 8 team playoff. This also would make the survival of the bowl system more viable, with much more entertaining contests possible than if 16 teams were in the playoff.

The current bowl season has about 3 dozen bowl games, which is ridiculous. I cut that in half and hearken back to my childhood when the New Year’s Day bowl games meant something. I am suggesting that there be 19 bowl games broken down into three tiers. Tier 1 consists of five games all played on January 1st. They would have the first choice of the non-playoff, bowl eligible (atleast 7 wins) teams.

Tier 2 is comprised of six games played between Christmas and New Year’s. They would invite their teams after the Tier 1 games are all set. Tier 3 would be comprised of eight games all played before Christmas and would choose from amongst bowl eligible teams remaining after Tiers 1 & 2 make their choices. No bowl game would be tied into any particular region, but it obviously would make sense to consider geographic proximity and ticket sales when inviting participants. The three military academies…Army, Navy, & Air Force…would compete for an automatic bid to the Freedom Bowl in Philadelphia. Since I am setting the threshold for bowl eligibility at 7 wins out of an 11 game season we should see more quality matchups, but it still remains possible that some 7 win teams might not get invited anywhere. If that happens the powers-that-be at those schools would be well advised to do a thorough analysis of their program to discover the reason they were left on the outside looking in, whether it be a weak schedule, lack of fan support, or a general perception issue. In the unlikely event that there are not enough eligible teams to fill all available bowl slots Tier 3 bowls would be allowed to appeal to the NCAA for an exemption to be permitted to invite teams with 6 victories.

The 8 team playoff would take place over the course of 2 weeks in December, concluding on January 2nd with the National Championship game. I will not address television contracts for the bowls or the playoffs, and I will leave it up to folks smarter than I to decide where the championship game would be played, although first round and semifinal games would take place at the home field of the higher 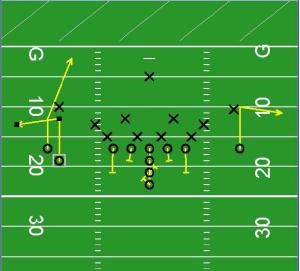 seed. The three at large teams would be the 3 highest ranked teams who did not automatically qualify by having the best record within their region. The 8 playoff teams would be seeded according to ranking in the one and only poll, which would be comprised of the following: the 25 most recent living Heisman Trophy winners, 100 members of the print media (2 from each state), 25 members of the television sports media, 25 members of the electronic media, 25 former college football coaches, and a nationwide fan vote to be conducted via The Internet on the NCAA website. Voters would be urged to take into consideration strength of schedule when casting their ballots and all ballots (except the fan vote of course) would be made public. No official pre-season rankings would be issued, and the first poll would be done after the 3rd week of the season.

Here are the redrawn regions and the bowl game lineup:

In the next and likely concluding installment of this project I will tie up some loose ends, addressing things like scheduling, corporate sponsorship, and network affiliations. Until then, enjoy what’s left of this season, and looking ahead to the 2011 season let me just say Go Herd!! and Go Mountaineers!!.