A new year…a new decade…has dawned. What better time to introduce a new feature here at The Manofesto, a little ditty I am calling The Superfluous 7. Modestly modeled after Letterman’s Top 10, I am calling my lists superfluous because I am not arrogant enough to think they are in any way necessary or important. Most of the time they’ll be flippantly fun, sometimes maybe a bit more mocking and edgy.

Our first topic of 2010 will be, fittingly enough, New Year’s resolutions. I am not a big fan of the resolution. It just seems like an exercise in futility. If you really want to accomplish something just do it. There’s no reason to wait for an arbitrary date on the calendar. There’s no way of knowing how many people actually keep their resolutions, but I suspect the percentage is extremely low. As I write this it is the 3rd day of the year and I’m betting the vast majority have already broken promises they made to themselves. I am not trying to be negative, I am just being honest.

So, without any further ado…

from the home office in Waxahachie, Texas…

I’m not a smoker. Never have been, never will be. Oh sure, I’ve smoked a cigarette or two or three in my time (usually in a dark bar at 1am while

under the heavy influence of adult beverages while in college), and I have nothing against the occasional cigar…..but that does not a smoker make. I put this in the 7 spot simply because I do know people that have quit successfully, and I think more often than not, out of all of these resolutions, this is the one people really WANT to keep. But I also know that quitting is a very difficult task and something that has to be done because a person is really truly ready to make a change and not just because the calendar says January 1.

What does this even mean?? I live a fairly simple life, so I don’t really have all that much to keep track of and manage. As long as I remember to

feed the dog, pay the cable, phone, and internet bill, and show up to work on time it’s all good. I did go through a phase where I carried around a very nice looking planner for a couple of years, but I came to realize that I rarely had anything to plan. Now I know life can be a bit more hectic for folks with a spouse, children, an important job, and lots of social activities. But it is my opinion that there are two kinds of people…those fastidious, Type A, jet setting, always-on-the-go types who need to “be organized”, and then the other 90% of the population. If you fall into the first group you are probably already organized, and if you’re a common ordinary schlub like me then why bother?? Really, you aren’t that important. Nothing in your life is that dire of an emergency…you just like to ramp up the drama to inflate your sense of importance and self worth. Calm down, chill out, and have a beverage. As long as you feed your kids and keep them in school, make sure you’re a good employee at work, and keep the car gassed up you’ll be okay.

Really?? Isn’t having a job enough?? I know volunteer work sounds like a really nice thing to do…like saving the planet or feeding those poor

African kids that hang out with Sally Struthers. But the reality is that most of us get up, go to work, and by the time we get home, do any kind of family stuff, and do what is necessary to keep up the house our dance card is pretty full. Most of us want to spend any free time we have curled up with a good book, mindlessly surfing through the 500 channels on our big screen TV, or chatting with friends online. I myself am a Literacy Volunteer but if I am being completely honest I am a horrible one. I got into it at a time in my life where I had some surplus time due to health issues and not being able to work. Now that I am back on the job I just don’t have the time, energy, or inclination to be super volunteer…and I’m single with no kids and a rather sparse social life. I suspect most everyone is of that mindset, and you know what…that’s okay.

This is another example where there are two kinds of people…those who enjoy learning and those who do not. A lot of people look at the 12 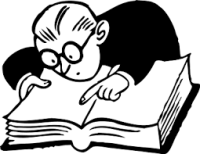 years of public school as a marathon that they cross the finish line of sweaty, exhausted, and borderline delirious. Once they are out they are OUT. Some of us run a little further into college, but eventually we crawl feverishly across that threshold as well, glad that it’s over. Then there are those folks that never stop. They have 8 degrees, they take classes online, they attend workshops at the YMCA…they just can’t get enough. That second group of people doesn’t make this resolution because they don’t have to. The first group will never keep the resolution because if they were that sort of person they’d be in the latter group.

3 Read The Bible Through In A Year

I have real issues with this one. Reading…studying…The Word of God should not be an academic, organized, oppressive exercise. If you have to

have a schedule to do it and force yourself to maintain that schedule then it is likely that you aren’t going to get much out of your reading. If we would all just shut the computer and the TV off for awhile each day and be lead by The Holy Spirit we would be guided as to what and how much to study. You might chew on a single verse of Scripture for a week, or you might get through all the minor prophets in a weekend. My point is this…don’t rely on a man-made schedule to compel you to mindlessly read what will ultimately be meaningless words. Be lead by The Spirit to engage God’s Word as you would any living, breathing thing. It’s the first step to what we really need to develop anyway…a truly close relationship with Jesus Christ.

2 Get Out of Debt

Depending on which source one believes, somewhere around half of us, give or take a few percent, are in debt of some kind. Credit cards,

student loans, medical expenses, mortgages, and car payments take a big chunk out of a lot of folks’ paychecks. And every January people say “This is the year I am gonna pay everything off!!” But inevitably something happens…the car breaks down, the roof needs replaced, the kids get sick, the company downsizes. It’s called life, and oftentimes it isn’t kind. That doesn’t mean we stop trying. Hell no…we get back on that horse and we try again. And I am certainly not advocating wallowing in debt. However, I am also not a big fan of setting yourself up for disappointment and the discouraging feelings of failure that arise when you still owe some major bucks in 365 days. Unlike the previous entrant in this list, getting out of debt does require a plan and a steadfast, almost dispassionate commitment to a firm course of action. That’s why glibly designating it as a New Year’s resolution is a doomed proposition.

or more, but almost certainly not less. You like to eat. So what?? A couple of years ago I lost 30 pounds. Want to know my secret?? I was in a “skilled” nursing facility, at the age of 33, for 6 months. I don’t really support that plan. And that experience also taught me that having access to tasty food is a gift from God that we shouldn’t dismiss so thoughtlessly. I am not promoting being purposely unhealthy. Don’t let yourself become one of those people on a Richard Simmons special that hasn’t been able to leave home since The Reagan Administration and needs a crane to take the side off their house and transport them to the hospital, like the mother from What’s Eating Gilbert Grape? who died and they burnt the house down because that was the easiest way to dispose of the body. But again, if you need an arbitrary date on the calendar to make an empty promise that you are all the sudden…overnight…going to change your unhealthy habits then your chances of success are slim (no pun intended). You will make those changes when you are really motivated and ready, and there is less than a 1% chance of that moment magically occurring on January 1.