We continue on our path with a set of five disparate films that show just how eclectic my tastes can be. By now faithful readers are probably gaining some insight into my psyche, atleast so far as what entertains me. Please don’t hesitate to provide feedback, positive or otherwise. I claim no monopoly on defining quality amusement and always welcome the insight of others.

95 Uncle Buck
One of the most regrettable losses in American cinema during the past two decades was the untimely death of John Candy due to heart disease.

Not really an A-List star or leading man, Candy nevertheless had an impressive career and brought joy to millions in such films as Spaceballs, National Lampoon’s Vacation, and Stripes. And while the majority of his roles were supporting and bit parts, there are two significant lead roles that stand out, one of those being in Uncle Buck. Buck is a slovenly bachelor who is unexpectedly called upon to babysit his nieces and nephew. The kids are a real handful, especially the eldest daughter, a rebellious teenager, but Buck has his own unique brand of parenting and discipline. Hilarity ensues. I’m not usually a fan of overly schmaltzy conclusions…..”heartwarming” mishandled triggers the gag reflex. But Uncle Buck does it right and has fun along the way, without resorting to the foulness so omnipresent in many modern films. It is also a departure of sorts for director John Hughes, known so well for his 80’s teen hits. It seems odd to say, but I believe Hughes is one of the most underappreciated writers and directors out there. This movie also introduced the world to Macaulay Culkin, who would become a 10 year old megastar just a year later in Home Alone. 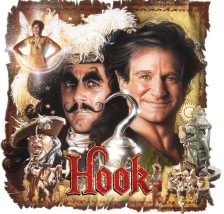 opinion. Where the movie is seen, who one is with, what one may be experiencing in life at the moment…..all can enhance (or in rare cases be a detriment to) the enjoyment and long term memory of a particular film. I saw Hook while in college in an old, historic theater with two of my best friends. We were literally the only three people in the theater and we had a blast. It’s one of my fondest memories. The fact that Robin Williams is one of my very favorite actors (and Dustin Hoffman isn’t exactly a slouch) also plays a part in my high opinion. Though not a critical success, and not without some issues (Julia Roberts as Tinkerbell?? please), I find Hook to be a perfectly logical update of the Peter Pan mythology, the story being that he grew up and is now a Type A workaholic that doesn’t spend enough time with his family. It’s a very 90’s kind of theme and it works

93 Honeymoon In Vegas
A movie’s setting and its music are two key elements to success. Think Jaws and that haunting theme, Grease and its 1950’s high school motif

and awesome soundtrack, The Blues Brothers with its Chicago backdrop and bluesy vibe, or Saturday Night Fever and disco. A perfect example of this vital relationship is Honeymoon in Vegas. Would Honeymoon in Myrtle Beach or Honeymoon in the Bahamas have worked?? Probably not. Now, I must admit that I’m a sucker for all things Vegas and have been planning a trip there for awhile, but looking at it as objectively as possible it cannot be denied that the Las Vegas backdrop just seems to work. Ocean’s Eleven (and Ocean’s 13), Bugsy, Rain Man, Casino, Swingers…..one could compile quite an impressive Vegas filmography (and yes, I’m conveniently ignoring Showgirls…..they can’t all be gems). The cast is superb, headlined by Nicolas Cage and James Caan, with solid performances by the always vivacious Sarah Jessica Parker, Pat Morita of Karate Kid and Happy Days fame, and a group of skydiving Elvis impersonators. Speaking of The King, the soundtrack is made up of Elvis covers done by a variety of artists including Bruce Springsteen, Billy Joel, and John Cougar Cougar-Mellencamp Mellencamp and ain’t bad at all.

92 The Ten Commandments
If it weren’t for the ever increasing hatred of Christianity in America I’d say The Ten Commandments is a perfect candidate for a big budget remake. The only problem with the original is the now antiquated special effects. Imagine what CGI and other modern tricks of the trade could accomplish in scenes like the parting of

The Red Sea or Moses encountering the burning bush? Of course the other issue (besides liberal Godlessness) would be replacing Charlton Heston as Moses…..certainly no easy task. Anyway, until that day comes…if it ever comes…we have the original and it’s just fine. Is it Biblically accurate? Not exactly. There is a certain amount of poetic license taken by director Cecil B. Demille. But it isn’t offensively out of bounds either. Heston sadly became a caricature in the last couple decades of his life, but at one time he was among the most highly esteemed actors of his generation, and nowhere is he better than in The Ten Commandments. Surprisingly the film continues to be an Easter tradition on ABC television, giving millions an ongoing opportunity to enjoy and embrace its greatness.

91 Pride of the Yankees
The story of baseball legend Lou Gehrig is atleast somewhat familiar to even non-fans. This film chronicled his life just a few short years after his death caused by the disease that now bears his name. I first saw Pride of the Yankees in college during a sports films class (yes, such a class exists…and it was an easy A and a lot of fun) and loved it, even though I’m not a big Yankee guy. The real story is touching and emotional, and the movie does it 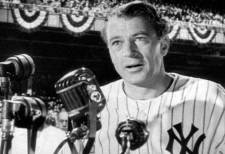 justice. Gary Cooper is perfectly cast, as is Teresa Wright, and actress that never became a big star much to the surprise of anyone who sees her as Gehrig’s chipper wife Eleanor. It is the love story of Lou and Eleanor Gehrig that is the true soul of the movie, and that’s just fine, even in the eyes of a person like myself who doesn’t usually gravitate towards sentimental romance. Some of the scenes involving Lou’s German immigrant parents might seem a bit corny to modern audiences, but that minor infraction can be forgiven. Of course it all culminates with Gehrig’s legendary speech at Yankee Stadium where he declared himself “the luckiest man on the face of the Earth”. Not long ago I read a superb Gehrig biography by Jonathan Eig entitled Luckiest Man and I recommend it to anyone who enjoys this movie.