The Olympics. Reality television shows like Survivor, The Bachelorette, American Idol, & The Amazing Race. Orwell’s 1984. Huxley’s Brave New World. Bradbury’s Fahrenheit 451. Greek & Roman Mythology. 24 Hour news channels who don’t even try to hide their political ideology. American Gladiators. Movies such as Star Wars, The Truman Show, Blade Runner, and The Running Man. All of these would seem to contribute bits & pieces of inspiration to The Hunger Games Trilogy.

I was a bit hesitant to give The Hunger Games a whirl. It is officially classified as “young adult fiction”, and given the fact that I am an educated 30-something with refined taste & somewhat high standards rather than a pre-pubescent teenager easily taken in by hunky heartthrobs, werewolves & vampires, and angsty love triangles I was understandably trepidatious. However, the premise won me over and I am glad it did.

The trilogy consists of three solidly lengthy but not drawn out novels…The Hunger Games, Catching Fire, and Mockingjay…written by Suzanne Collins, a middle-aged woman from Connecticut who, much like Harry Potter creator JK Rowling, had achieved nothing notable in her literary career before penning what has become a sensationally popular phenomenon.

The Hunger Games is set in Panem, a dystopian version of North America in which the nations we know & love have been destroyed, although exactly how that occurred is never really explored (I smell a “prequel”). At any rate, Panem…atleast most of it…isn’t a futuristic society of technological 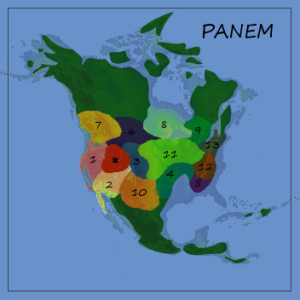 wonder. No, it is more primitive, more…colonial. The nation is divided into 12 districts all controlled by the dictatorial folks in The Capitol and lead by malevolent President Coriolanus Snow, whose creepiness factor makes our modern day politicians look like a collection of fine citizens from Mayberry. We are told that a quarter century before there was an uprising among the districts against The Capitol that was squashed like a bug, and that as punishment for that unsuccessful mutiny The Hunger Games was created. The games are an annual televised event in which two teenagers, one male and one female, from each district are chosen at random as “tributes”. These 24 tributes are dropped into The Arena, where they are expected to fight to the death until only one is left standing as The Victor. And this is considered big time entertainment in Panem.

The poorest of the districts is 12, a coal mining region reminiscent of what we know as Appalachia. That is where we meet our young heroine Katniss Everdeen, a 16 year old girl who spends her time hunting illegally to support her fragile mother and younger sister after her father was killed in a mining accident. Her best friend & hunting buddy is Gale Hawthorne, who also lost his father in the same tragedy and takes care of his mother & younger siblings. Then there is Peeta Mellark, the local baker’s son who comes from what passes for an upper middle class background in District 12. These three form the requisite triumvirate, although to be honest the romance aspect of the story isn’t nearly as distracting as I originally feared it might be.

The Hunger Games has Katniss & Peeta being chosen as tributes and fighting in the 74th games. Catching Fire finds Panem on the cusp of another revolution, thanks to a perceived act of defiance by our two protagonists at the end of the first book. That insolence lands them back in The Arena fighting an all-star group of past victors. Mockingjay shows The Districts in full scale war against The Capitol, with Katniss as the reluctant figurehead of the rebellion.

Though the two stories bear little more that superficial resemblance to one another I cannot help but draw comparisons between this trilogy and the wildly popular Harry Potter series. Both are supposedly aimed at the younger demographic, yet neither hesitates to take the reader down a dark & violent path. Stylistically, Rowling writes on a much deeper level. Potter may be “young adult” fiction, but the multi-layered storytelling is on par with some of our most beloved classic literature. Conversely, The Hunger Games books, all written in the first person through the eyes of Katniss, never quite reaches the profound gravitas that transcends greatness and segues into sublime singularity. Whereas one gets the feeling that Rowling’s aim was to write some really good books and that the ensuing pop culture obsession that was thrust upon her was a pleasant byproduct, The Hunger Games feels like Collins had a movie deal on her mind from the very beginning and purposely hoped to manufacture a sensation to match the likes of Potter, Twilight, and The Lord of the Rings trilogy. That’s not meant to be as much of a criticism as it is an astute observation.

All three books are intensely absorbing, real page turners that are hard to put down. Their shortcomings are likely directly related to the target audience. There are several spots where I felt like plot points weren’t fully explored, where important happenings were glossed over to appease the short attention spans of young readers. At times the author seems to be on the threshold of

making some keen observations about society, politics, and war, but stops short and pulls back so as not to bog the action down with philosophical insight. Each book could have easily been another hundred pages and more thoroughly covered key elements of the story without becoming tedious. However, these flaws are the minor irritations of a nerdy bookworm who has no qualms about tackling an 800 page novel if the story is good enough. In all likelihood these books as they are were a smart choice by the author. At the end of the day we have a gripping premise, interesting characters, and a story that keeps the reader on the edge of our seat and wanting to see what happens next. That’s a pretty good recipe for some great books in my humble opinion.

I must admit that the only reason I even heard of the books is because the first movie is coming out soon. At first I was dismissive due to the inevitable association with Twilight…books that I’ve never read & movies that I’ve not seen and likely never will. Like I said, the whole vampire/werewolf thing just doesn’t frost my cupcake. But the political overtones and the somewhat realistic vibe…the idea that this really could happen to our world…was enough for me to take a flyer. I am looking forward to the movies because as mentioned I believe they were the intended end game all along. Whereas the Potter movies are good but cannot hold a candle to the books, I have a feeling that the Hunger Games movies will surpass the books’ achievements. The violence, action, and high body count are tailor made for the entertainment appetite of 21st Century America.

2 thoughts on “The Hunger Games Trilogy”