Awhile back I read a book called The 101 Most Influential People Who Never Lived. It wasn’t quite what I thought it was going to be when I made the impulse purchase, skewing a bit too much toward the analytical and academic instead of the lighthearted and interesting. The authors made a point of emphasizing that their list was based on influence and not popularity. Many of the conclusions reached were curious, some in a good way and some in a real head scratching sort of way. Rosie the Riveter, Buffy the Vampire Slayer, and Barbie (the doll) made their list. The Marlboro Man was #1. Meanwhile, Fonzie and Rocky Balboa are nowhere to be found. So I decided to make my own, much shorter list. My criteria isn’t based on popularity or influence. The question I asked myself was simply “Who would it be cool to hang out with??” Now let me be very clear…I am not simply talking about meeting them or doing an interview. I am talking about spending a weekend or maybe a summer with a person, becoming involved in their daily life. Michael Corleone is an awesome character, but really…who wants to become part of the mafia with all the guns and blood?? Shakespeare created many memorable characters, but a lot of them are unstable and end up dead. I love Forrest Gump, but I think he may get on my nerves after awhile. So I thought about who it would be fun to converse with and learn from, or just have a good time with. It was difficult to narrow down to seven, but the mission was accomplished. Who would you enjoy chillin’ with if you had the opportunity and the line between fiction and reality was not only blurred but eliminated?? Don’t hesitate to let me know…after you enjoy…..

from the home office in Spasticsville, Kansas…..

The Superfluous 7 Fictional Characters With Whom I’d Like To Hang Out: 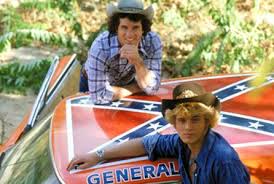 25 years later, that I can truly appreciate the show (and I mean that sincerely). Was the acting great and the writing superb?? No. But no one ever got killed, and the crimes committed were pretty benign. Hazzard County seems like it would be a cool little town in which to live, as long as one doesn’t get on the bad side of Boss Hogg & Sheriff Roscoe P. Coltrane…and even then they are actually rather tame as far as villains go. Now I am resisting the urge to write about what I would do if given the chance to spend some quality time with Daisy, instead taking the high road and choosing to chillax with Bo & Luke. Did they have jobs?? What did they do all day other than run the roads in the General Lee and occasionally throw back a cold one at The Boar’s Nest?? I suppose they helped Uncle Jesse by doing most of the heavy lifting on the farm, but that’s okay…a little elbow grease and sweat never hurt anyone. I’m not much of a fast driver, but I could handle being a passenger as the guys race around evading the law. I imagine it’d get the ol’ blood pumping, especially when a washed out bridge forces one of those cool jumps. I could grip the roll bar and yell “Yeeeee-haaaaaa”. Mostly I can just see myself enjoying the slow pace, the good people, and the relative innocence of a place like Hazzard and learning the essence of being a cool country boy from The Dukes. And yes…I’d probably hit on Daisy.

There is a reason I specifically chose Bilbo Baggins. His nephew Frodo is a character we get to know much more in depth, as he is the main

protagonist in all the Lord of the Rings books/movies. In contrast, Bilbo is the focus in only one shorter book, The Hobbit. But Frodo’s adventure is so long, grueling, and dangerous that it doesn’t seem like it’d be much fun to be in his proximity. As a matter of fact, because of that damn Ring (The One to rule them all) Frodo’s life and the lives of everyone around him becomes way too scary. Bilbo’s adventure in The Hobbit is not without peril, but it is much shorter and less fraught with life-in-the-balance moments. However, if I were to hang out with Bilbo it would not be in the midst of an adventure at all. I would want to hang out in The Shire with he and the other hobbits. The Shire is a quiet, idyllic land where the hobbits enjoy simple things like eating, drinking, smoking, and being social. The hobbits enjoy gardening and live off the fat of the land. It is a simple place and they are simple folk, which I like. Bilbo is a good storyteller and definitely has some stories to tell, plus he is pals with the wizard Gandalf, so one never knows when he might pop in.

Batman is the ultimate example of bi-polar disorder. How cool would it be to hang out with him?? During the day one could enjoy the lavish

lifestyle of billionaire Bruce Wayne, and at night get a taste of adventure as The Dark Night trolls the seedy underbelly of Gotham City exacting vigilante justice. I would LOVE to ride shotgun in The Batmobile and of course chill in the ultimate man cave, The Bat Cave. I am not much for physicality, but it’d be intriguing to try to outwit villains like The Riddler, Catwoman, and The Penguin. While Batman doesn’t seem like much of a conversationalist his alter ego, Bruce Wayne, is charming and charismatic. And since I would know his secret we could have rather fascinating discussions. Trying to get inside the head of a man who was emotionally scarred as a child by seeing his parents gunned down and who uses that trauma as a reason to dress up like a bat and fight crime…well call me crazy, but that sounds like fun.

It has long been my opinion that the happiest place on Earth is not Disney World, but rather the town of Mayberry. I am too young to have

caught The Andy Griffith Show when it first aired in the 60’s, but forty years after it was cancelled generations of people like me are still invited into the lives of Andy, Opie, Barney, and Aunt Bea thanks to reruns. And while Barney Fife is one of the funniest characters in television history and we all love Opie because we have literally seen Ron Howard grow from a small boy to an Oscar winning director and a grandfather, for me the heart & soul of the show and the town is Sheriff Andy. It may seem like a trite cliché, but Andy Taylor is a good man. He is kind, wise, understanding, and tough. He’s a great Dad, a good friend, and good at his job. I have reached a point in my life where I see that running around like a chicken with its head cut off trying to impress people and achieve what the world defines as success is akin to a cat chasing its tale…an exercise in futility. Faith, family, and friendship are the most important things in life. I think a man like Sheriff Taylor understands that, and I would enjoy immensely the opportunity to sit on the front porch sipping some iced tea, picking a little on the ol’ guitar, and shooting the breeze with him.

This was a tough call. Thanks to my good friend The Owl I am a Trekkie, and the Star Trek Universe is polluted with memorable characters. I

love Bones McCoy, but I really can’t see myself voluntarily spending time with a doctor. Scotty is cool, but I am not an engineer either. Spock is interesting, but really…would he even understand the concept of chillaxing?? ‘Tis not very logical afterall. Captain Kirk is awesome, but a little too intense and adventurous for my tastes. I like to keep things low key. Captain Picard is more my speed. He is less of a swashbuckler and more of an intellectual, an educated man with eclectic interests in classical music, literature, archaeology, fencing, and physics. Picard is the type of guy one could probably sit and listen to for hours, even if he is so smart that the majority of what he is saying goes way above your head. Captain Kirk would be fun to party with and you’d definitely want him on your side in a fight, but Picard is someone to learn from and gain insight about the world.

Oh come on…who wouldn’t want to hang out with Santa Claus?? And I am not just talking about on Christmas Eve as he makes his journey

around the globe delivering presents and eating cookies. I want to spend all year with Old Saint Nick. How does he know when we are sleeping and when we are awake?? How does he know whether we’ve been bad or good?? How does he know exactly what every child wants for Christmas?? Precisely when does he check The List twice and how much time does that take?? Who compiles The List in the first place?? What kind of set up does The North Pole have as far as manufacturing all the latest gadgets kids want these days?? Most of us are selfish and not the least bit concerned about the needs of others, so why is Santa so different?? Why is he so giving and what lead him down this career path?? What is the economic situation for him personally and professionally since he just gives presents away?? Does he get a cut of the profits from stores like WalMart, Sears, Amazon.com, and Best Buy?? What is the deal with the elves?? These are things I need to know people!!

I have been a huge Sherlockian since junior high school. I have read each of the 56 short stories and 4 novels countless times and enjoy them 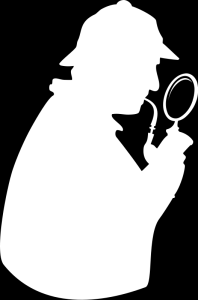 tremendously. I think maybe the coolest job in history was Watson’s. I would love love love to be Watson, hanging out with Holmes and then writing about all his adventures. I realize that Sir Arthur Conan Doyle makes Victorian London seem far more awesome than it probably was in reality, but that’s okay. Doyle’s London is an odd mix of quaint, mysterious, dangerous, and romantic. Holmes wouldn’t need to flip through endless channels of mind numbing idiocy even if the technology were available to him. He’s got plenty to keep him busy. If he’s not out solving some of the oddest crimes ever conceived he is conducting chemistry experiments in his living room, writing an academic treatise on various types of soil or poisons, or playing his violin. One would never get bored hanging out with Sherlock Holmes, except during those times of languid inactivity when he takes to shooting up cocaine. That’d be when I’d have to leave and visit someone else on the list. At any rate, spending time at 221B Baker Street would encompass meeting all sorts of strange people, trudging through the streets of London at all hours of the day & night in search of answers, and most of all learning at the feet of quite possibly the smartest man in history.